Just sharing my little corner  of  lifes  experience and viewpoints on this tractor hobby. Hopefully these little tid bits will help someone out sooner or later.

Entries in this blog

I recently had the transmission serviced on one of my two prestige tractors. I paid my son to do this in his shop as I was busy with other things and did not want to monkey with it. That tractor had 600 plus hours on it and was beginning to whine  alot at startup and was acting a bit sluggish compared to normal.  Other than that it was operating normally.  With the irregularities and hours on the machine I figured it was time to  service it and  perhaps a few others I have here in use. I am doing the second Prestige myself and sharing the experience here with you.

I chose to buy the Tuff Torq Brand oil.  The capacity listed for the Prestige transmission is listed at just under 2 jugs. 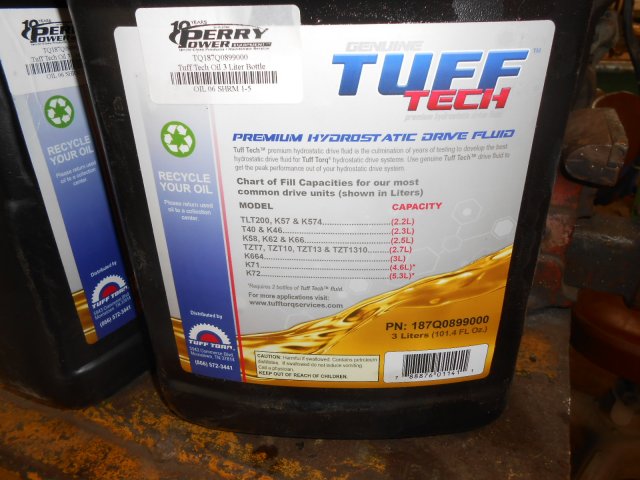 Once drained and refilled, I found that the reality is that I ended up using just under a jug in each tractor.  The difference is probably because the oil in the lines, hoses, cylinders and steering valve dont end up draining out of the system when you drain the transmission. 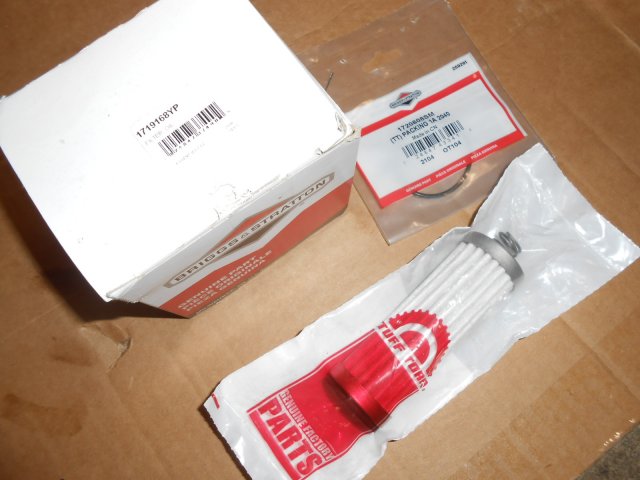 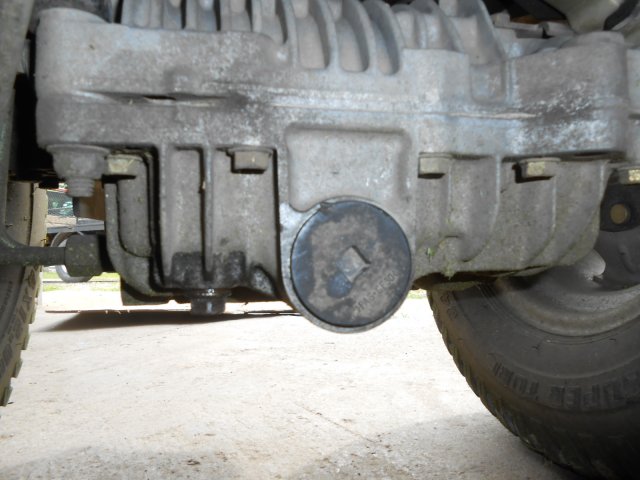 I started with removing the plugs on the bottom of the transmission letting the oil drain out into a pan. To the left of the plastic plug there is one plug... 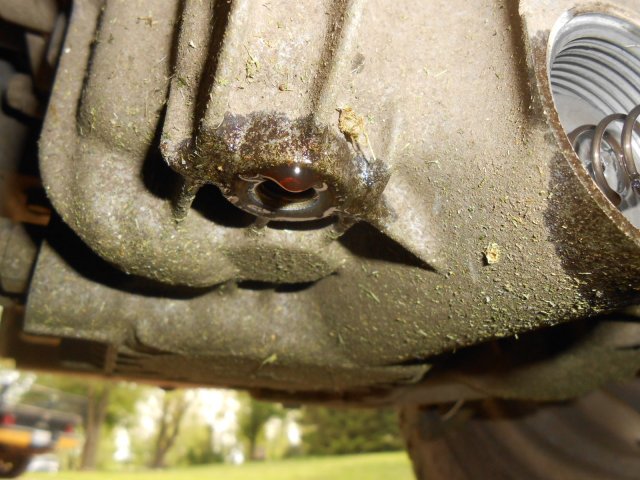 To the back of the transmission there is a second drain plug.. 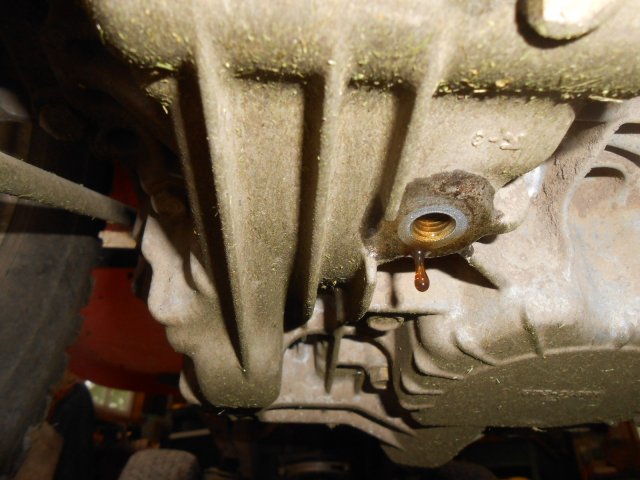 Following that I removed the plastic plug at the front. Just use a ratchet with the square end of an extension. 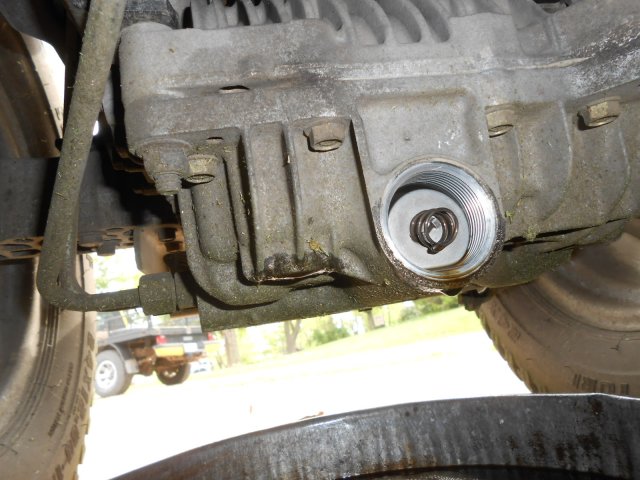 There is a spring on the end of the filter, and you can grab that and pull it out. This one is pretty dirty. 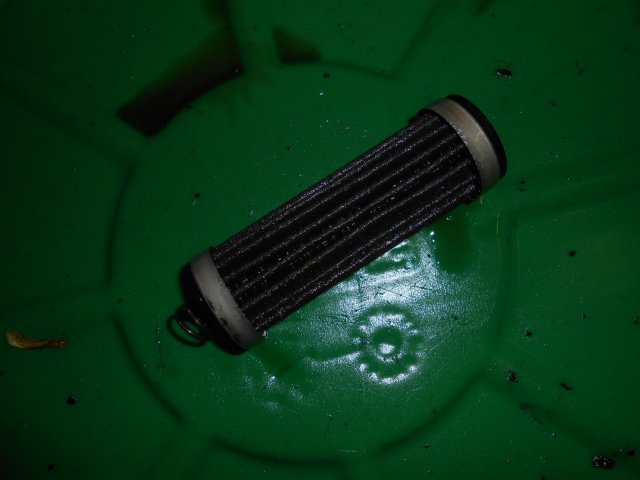 Once out and oil wiped off the edges and surfaces, I re-installed the plugs at the bottom of the transmission. Then installed the new Tuff Torq cylinder filter 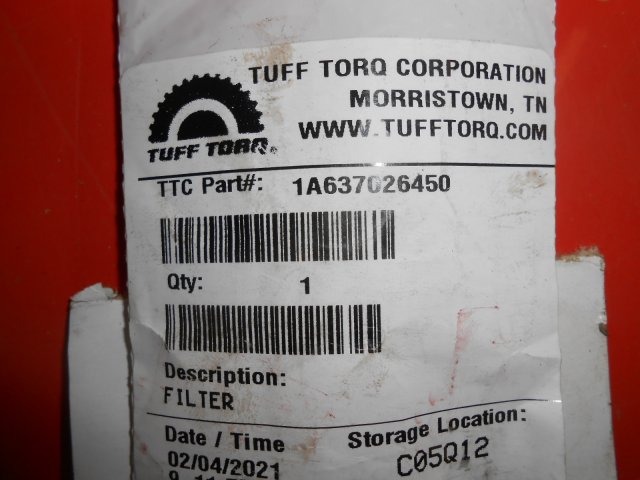 Pulled the old o-ring off the plastic cap , then installed the new o-ring... 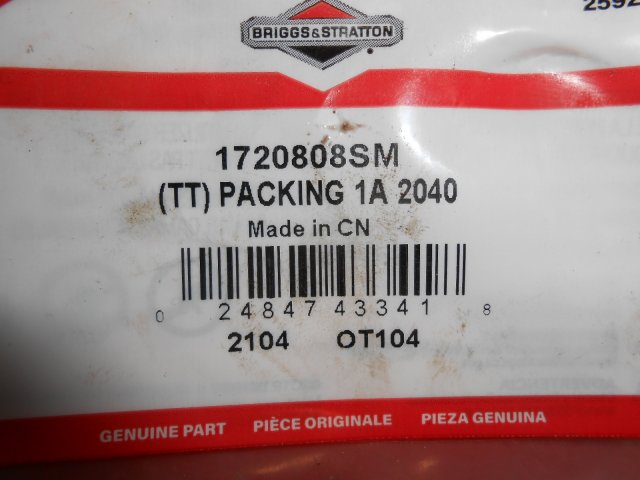 Then screwed the plastic cap back in place. I di not get carried away with torqing it on either. Snugged it up enough to compress the o-ring.

Then  I turned to the spin on filter under the seat deck. 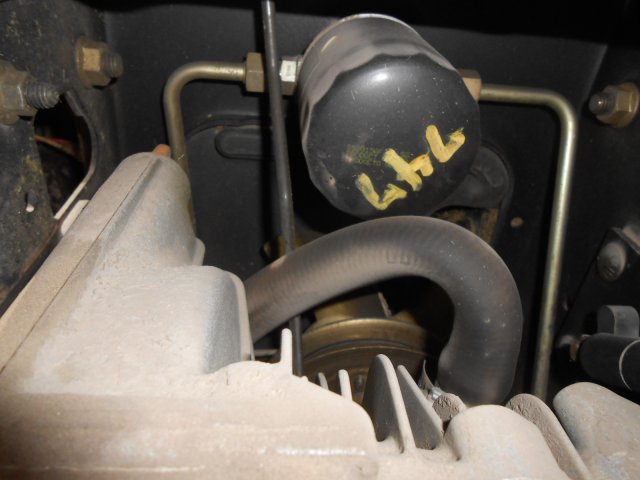 Pretty tight in there , but found a filter wrench like this useful. 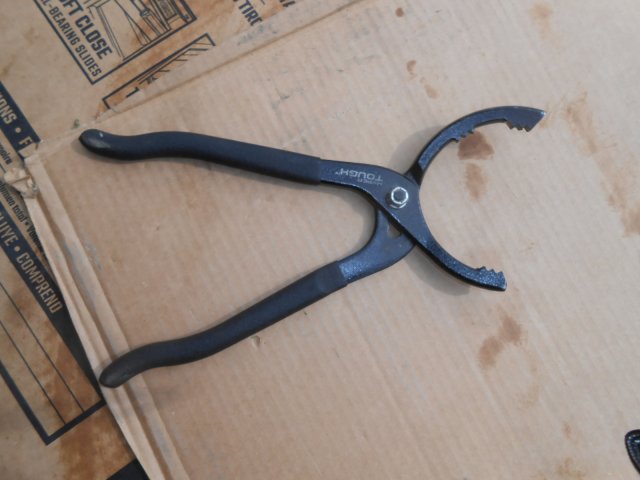 With this wrecnh I can get ahold of the filter on a slight angle and squeeze into the filter enough to get it grip and to turn to break free. Then just spin off by hand. Prepare for some oil spillage as you have to tip the filter to get it out and around the hose in the picture.  Then just get the new Briggs numbered filter  out... 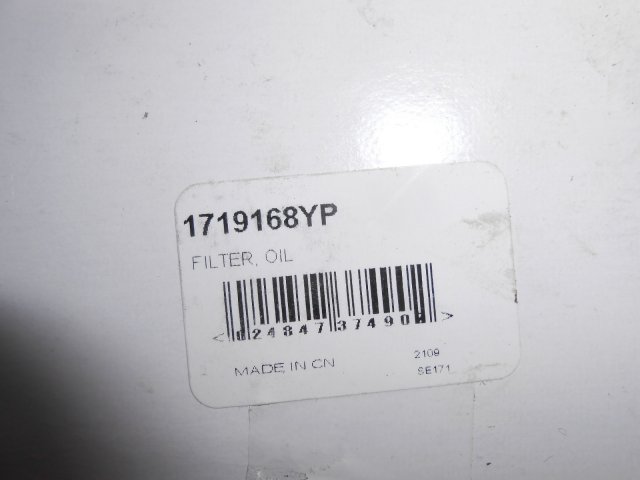 I filled it halfway up with new oil, lubed the rubber seal up with a bead of fresh oil, and screwed it in place. I have a yellow paint marker that I write the hours on the filter with so I know when it was changed last. As you can see in the picture of the old filter in position above.

Once that is all done , pop the plastic access cap off from in front of the tractor seat and you will find the expansion tank for the transmission there. 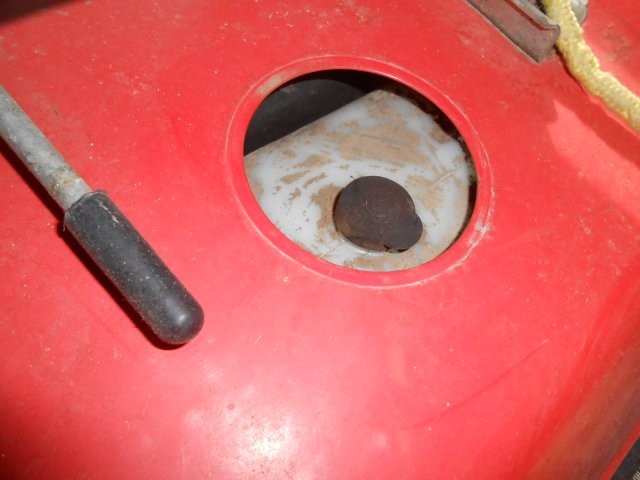 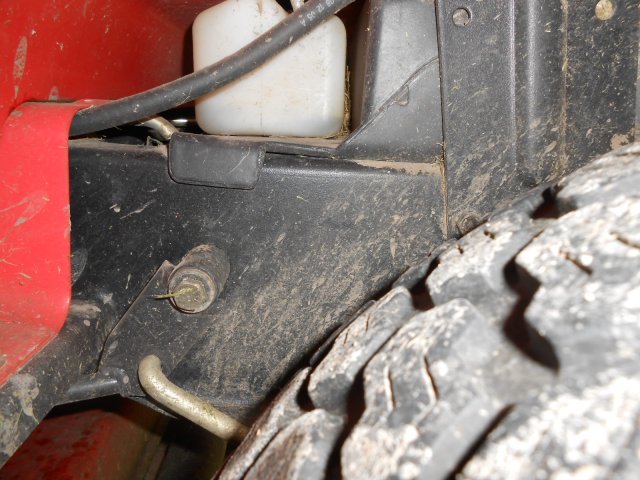 Once it stops draing into the transmission, I started the tractor up and drove it around a bit, working the powers sterring back and forth, running it forward and revers, and working the hydraulic lift up and down. After that I filled the expansion tank to where there is about 1" of fluid in it  with the tractor off.

This tractor was having some stiff steering problems before the oil/filter change. Its working alot better now. That and the transmission is alot quieter and smoother in operation. Going to tackle the conquest next...

While it is always best to remove a tire from the rim to blast and repaint, I find that many rims are in good enough shape to just clean up and brighten with a new coat of paint. If the tires are good, heres how I do the masking and painting without removing the tires.

Get a a roll of duck tape. Get the good stuff , not a cheepie with half the stickum on it.. The start with your index finger and push the leading corner up under the rim with the sticky to the tire. Push the sticky down against the tire, but just the width of your finger of tape.  Then just continue around the wheel  with two fingers holding the tape down and the index poking the leading edge down under and against the rim. 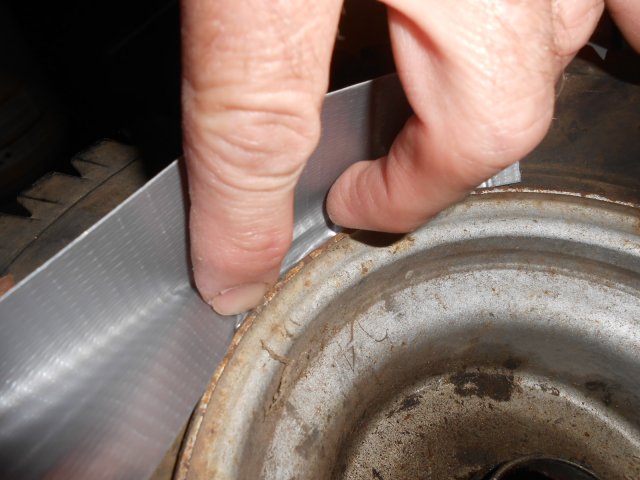 When you get around to where you started and get done it will look like this.... 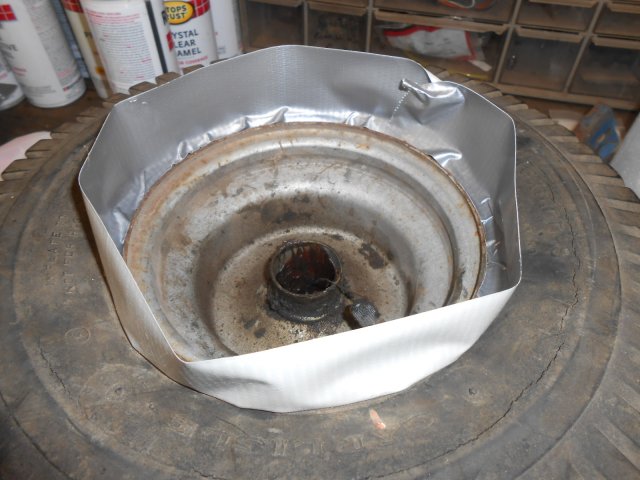 I usually have the top of the spray can down  just in the  taped circle and spray short bursts as I go around. Usually put the wheel up on a old garbage can turned upside down with cardboard under the wheel. This so I can easily walk around it as I paint.  Always keep moving as you spray as runs are easy to create painting this close to the part. Get done with one side, peel the tape off, turn over and tape up the other side. If you do get overspray on the tire by chance, just have a rag handy thats wetted with paint thinner and wipe it off before it dries.

You can also stand the tire up and paint with the can vertical, just turning the wheel as you go.

If you use the lay the tire down and paint method, you can also use a piece of carboard  in your off hand outside the tap to help shield the tire from overspray. At least till you get the hang of it.

I usually give the wheels  3-4 light coats, then let dry for a few days before reinstalling on the tractor