I recently purchased a new tractor.  Its a "late model" Simplicity Sovereign 18.  Late model is in quotes, because the darn thing is still 20 years old!  Anyway, its pretty much the ultimate Sovereign Simplicity made...Best engine, most features, etc.  Best thing is that its the power steering model, which is what elevates it to "ultimate" status.

Garden tractors changed a bit around the time this machine was produced...They became glorified lawn mowers.  No-one gardens anymore, and for those who want ground engaging capabilities, they  need to purchase sub-compact utility tractors (like a Kubota BX, John Deere 1025, or Simplicity Legacy XL)  However, the price tag on said machines is WAY more than I wanna spend, and I don't need a 60 inch mower deck!   Even used, they are up around $5000 for a nice one.  They have nice capabilities (I'd LOVE to have a front Loader) but I just can't justify it.

Here I am, wanting a heavy duty tractor, but not wanting to spend an arm and leg on a SCUT, and wanting to do more than just mow.  My old Simplicities fit the bill nicely.  I have a tiller, aerator, Mower, snowblower, weedcuter, etc.  and there are MORE things out there. If I really got crazy, I could get a disc, cultivator, sickle bar mower, front end loader, chipper/shreader, chemical sprayer,  ground trencher...the list goes on.  Some of this stuff is rare, but its available if you start asking the right people, and waving some Benjamins around.   Since you can't really replace them anymore, except with other old, used equipment and they obviously have quite a bit of utility, I want my toys to last!

When I picked up the Sovereign 18, I noticed that it was pretty clean, in that it hadn't been abused too badly, and probably hadn't seen much use.  The paint was faded, and as I looked it over and learned the nuances of the ol' girl, I noticed quite a few issues that needed to be addressed.  The first one I tackled was pure vanity...The faded paint.

I went a little crazy, and wetsanded the rear fender pan, and the hood.  Then I polished it back to a real nice shine.  Yes there are still some scratches, but that's OK.  Its a worker, not a trailer princess.  Chicks dig scars! 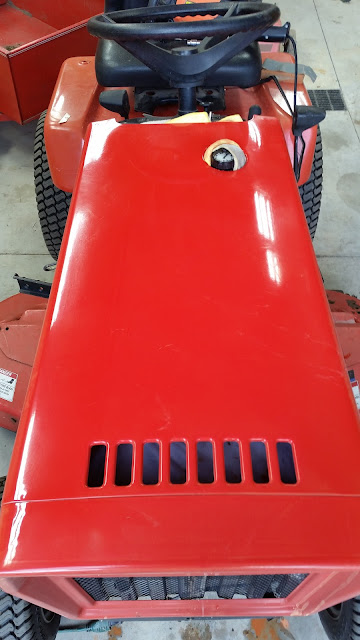 The hood came back nicely.  The rear fender pan and dash needed some more work.  The paint had started to bubble under the seat mounting bracket, and someone had drilled a hole through the dash.   I sanded the flaking paint off, primed, and painted what was necessary  The paint I bought (Simplicity factory touch up paint, mind you) doesn't quite match the original color though.

This tractor is looking good, but it still needs work.  The running boards will need a coat of paint, the dash tower needs buffing, and the frame needs paint.   Simplicity did something wrong when they powdercoated the chassis black.  Something in the prep went wrong, and there are giant sheets of paint coming off the frame.  I will have to address this in the off season (if there is such a thing for a year round worker).  Good thing I have multiple tractors, so I can set another one up to blow snow, cuz this one isn't going to see the wet until I get the metal covered! 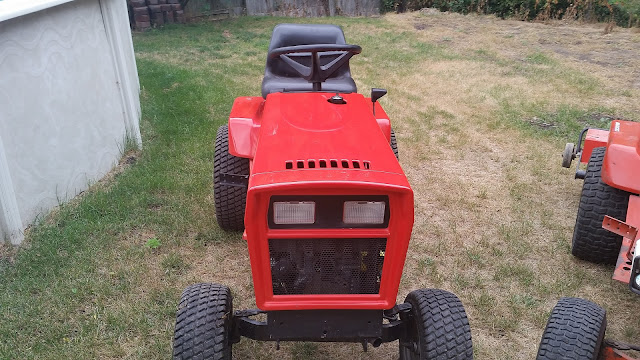 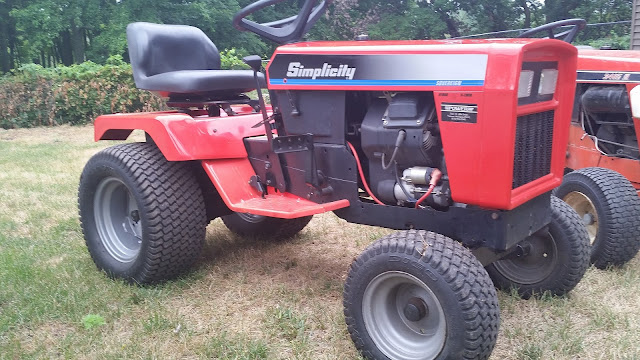 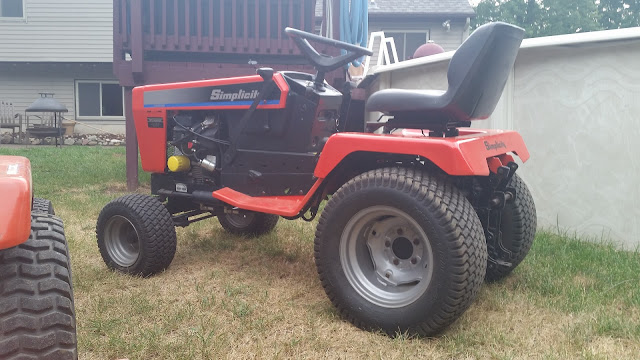