At the end of last cutting season, The old girl was really starting to struggle.  It got to where the engine would just stop...so, instead of risking a catastrophic failure, I pushed her to the barn, and used one of my other mowers (I have three total) to finish out the season.  It sat all winter that way.

April 01, 2016 I started pulling the hood and grill apart to get the old engine out.  Finished up on the morning of the second. 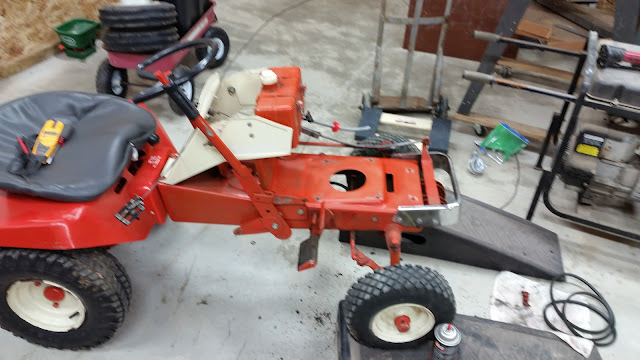 I took some measurements, and its gonna be TIGHT, but I think it will all look stock when done!  The new engine is physically much bigger than the old, but the mounting pattern is the same, and its an L-Head design, so overall length is pretty close.  Its much taller and wider though.  I have lots of clearance in those two dimensions, so I'm hoping that with very minor modifications, this new engine will look right at home. 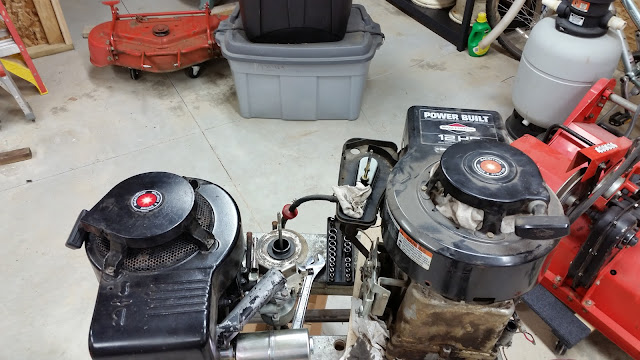 Old on the left, new on the right.  The new one is double the HP of the old one, and almost double the displacement!  I have it stripped down to the shortblock right now, correcting valve clearance, and removing mouse nests from the cooling fins.  I want new gaskets on this engine.  It had a lot of oily dirt buildup on it, and rather than install it, and clean up messes, I want it to be a nice clean install from the start.  I can't stand leaky equipment.  I'm off to order a gasket kit!