I have this 1965 Simplicity Broadmoor Rider that I picked up for 200 bucks last year.  Its an AWESOME little tractor, perfect for my little 0.25 acre yard city lot.

Its pretty great for a 50 year old machine!  Its been restored once in its life, and is in really good shape.  No rust, very minor dents, and the tires all hold air.  The paint could use some freshening up, but overall, pretty nice. 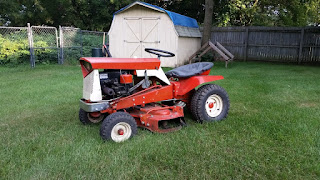 It is almost as maneuverable as a zero turn and lays stripes like you wouldn't believe. The deck is 32" wide, and has three blades!  It cuts better than anything I've ever seen, including pro grade equipment.  For real...If I wanted to, I could double cut and make a checkerboard to rival any big league baseball stadium. 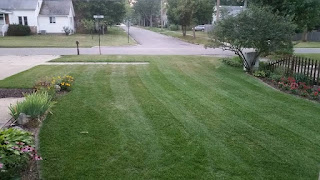 However, The engine is also 50 years old.  Its a little 6 horse vertical Briggs with a pull start.  Still runs, but the more I used it, the more it started failing on me.  Would be good for a parade, but mowing my yard seems to be pushing it too hard.  I also HATED all the grass clipping that this thing shoots out all over.  I found a NOS (new, old stock) mulching kit for my deck which is awesome.  However, mulching kits need more power, and I'm already noticing a lack of that.  So began the search for a new engine.

I found a possible donor in a Simplicity 5010 on craigslist.  It didn't run, and a kid bought it to screw around with.  Tranny locked up, so he took it apart, and then lost interest.  It came with a tiller and a 12 HP engine of the type I was looking for.  I gave him 100 bucks for it, and drug it home. 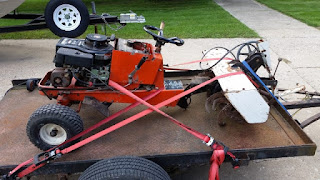 This is where the purists might want to stop reading!  That 12 HP is going in my 65 Broadmoor!