Time for another update on this ongoing remodeling project....

1.  I've gotten the majority of the old content from Simple trACtors republished and integrated into the new site.  The old sections that need to be dealt with still are Operation, Service, Do It Yourself, and the old Gallery.  I've moved some of that content out and put it under Reference Info.  I'm working on more, such as Al Eden's Electrical Troubleshooting info and the Simplicitity Hydraulics Training manual.  There's a few more things that are appropriate for that section, such as a Lubrication chart provided by Simplicity.

2.  Some of the old info likely will not be moved into the Research section.  For example, I had posted (in HTML) a Owner's Manual for the Simplicity 515 Loader (Allis L-12 equivalent).  Bob Tiarks has now uploaded a PDF version to the Downloads section, so I see no real need to edit all that old HTML and republish it.  I'm still trying to decide how much to move out of the old Operation section -- where I had sample manuals for mower decks, snowblowers, etc.  Several of those were added years ago, before Simplicity made their Owners Manuals downloadable for free.  How much value do you see in having those readily available, so that they can be linked to, or pictures/diagrams reused?    Here's what's  left to deal with:

3.  Converting the old Gallery will not be a trivial task, since there's over 300 pages, but it is not nearly as complicated nor time consuming as cleaning up all the "danged ole tables" used for specifications, cross-references, and such.  I am SO GLAD to have those in the rear view mirror.   So, this is the last thing on my priority list to move over, since many of the pictures are quite small in size -- do you remember when 640x480 was a big picture to display?  .I do want to move it, it is just at the bottom of the list.

4.  I've updated the site with the latest version of the core software, which hopefully incorporates a permanent fix to the nagging bug in processing credit cards to pay club dues.  It would work some times, in some browsers, only to fail again later.  I've also updated to the new theme/layout that controls the "look and feel."  This, and changing the menu software,  should've fixed the bugs with the menu  display in Internet Explorer v11.  I worked with the developer of this theme to try to create a clean and crisp look -- but also more of an older, more classic feel to match the age of these machines -- as opposed to the latest and greatest look for Windows or the Apple IOS.  Those looks will change -- and relatively soon -- as they try to convince you to buy their "latest and greatest."  I wanted something that hopefully will stand the test of time better... That was the thinking behind this look and feel, and so far I'm pleased with it.  What about you?

5.  I also updated the Classifieds once again, to incorporate the long-promised Trader Feedback system.   Since right now it requires that a purchase has been made through the Classifieds, it is not showing meaningful information for most users.  You may have noticed this below your username in the forums and elsewhere. 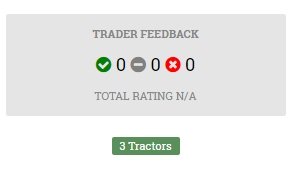 6.  Note also below that TRADER FEEDBACK block that 3 Tractors information from my user profile.  That is coming from the latest addition, the new Tractor Registry, showing that I have 3 tractors listed in the Registry.  While it is not 100% functional (there's an issue with adding new entries), I felt compelled to make it live, since I couldn't hide it on this menu.  Using the old menu software, I could make new menu selections visible only to Admins, until I was ready to disclose them and make the visible. But, I can't with this menu software.  So I decided to "announce it" and describe it.

8.  There's a couple remaining bugs that I'm tracking (including the one in the new Registry), but once I get those resolved, I need to take some time off.  I've spent weeks working on this thing,  essentially full-time.  I have a tractor, an ATV, and my VW project all sitting, feeling ignored.  I will continue to work bugs, add/tweak minor things, and work on republishing more content on a "time-available" basis.  Meanwhile I hope you like what this new site has turned into... If you want to help, then add content, whether it be new Articles, representative photos that I requested in the Research section, photo albums of your tractors, or whatever.

The new infrastructure is largely in place, and it is up to you, the club members, to take it from here....