I am getting a handle on blogging (late is better than never, right?) so bare with me as I cut from the original, paste in new entries, and add more.

I've thought about starting this on a FB post, saying something like: I've ended my life-long search for an Agri-Fab Utility 10 prototype carryall. I read about these "prototype" garden tractors found, one of a kind stuff, modifications like my dad and I would make to farm tractors and equipment to make them work better for us in our particular situation. Also, if we didn't have what we needed, and/or couldn't afford it, then we built it. I made this carry-all box to satisfy my want and save myself some cash. Thought also occurred to me the grandchildren might get a kick out of riding in it later.

As I stated, I sought advice from everyone I could think of about measurements, metal dimensions, maybe even buying a well worn Simplicity cart to use. Chris727 shuttered in his shoes when I mentioned I was thinking of "destroying a Simplicity dump cart for the cause. That caused me to rethink and remember a project build I'd followed on SimpletrACtors by snohiker  https://simpletractors.com/forums/topic/37363-carryall-update-5-26-11/#comment-413033  Take a look at it and you will no doubt see similarities.

Next up I contacted ZippoVarga for metal measurements. Zippo had bought an old, rough carry-all box  that needed a total undercarriage rebuild. 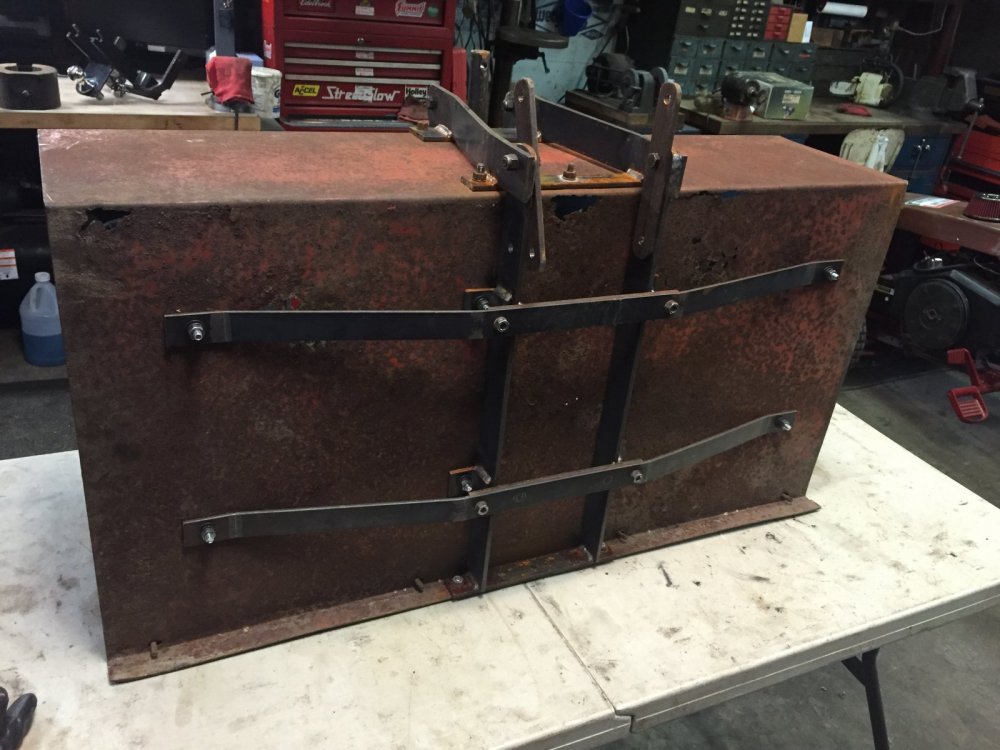 Again, you will see the similarity. If that furrow has already been plowed, and its working, all I really need to do is fall in line. 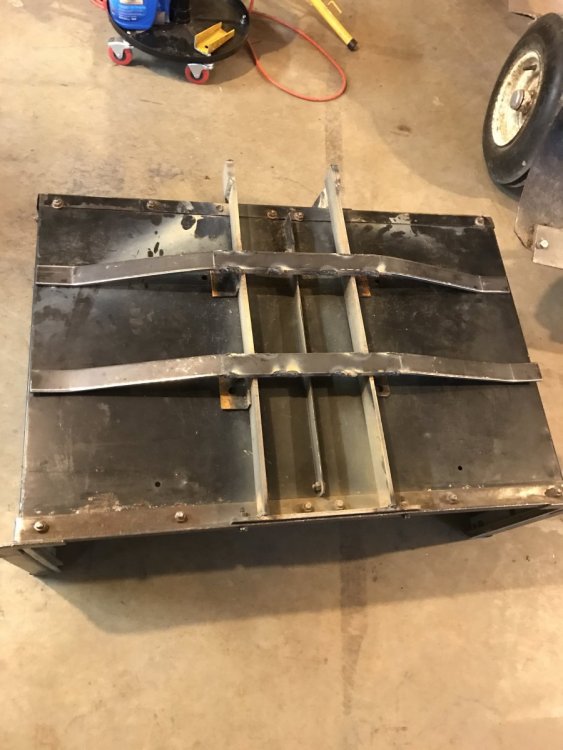 The run-down garden cart I bought from a CL ad was perfect. 2 flat tires and looked terrible but the bed was in nice, shape. 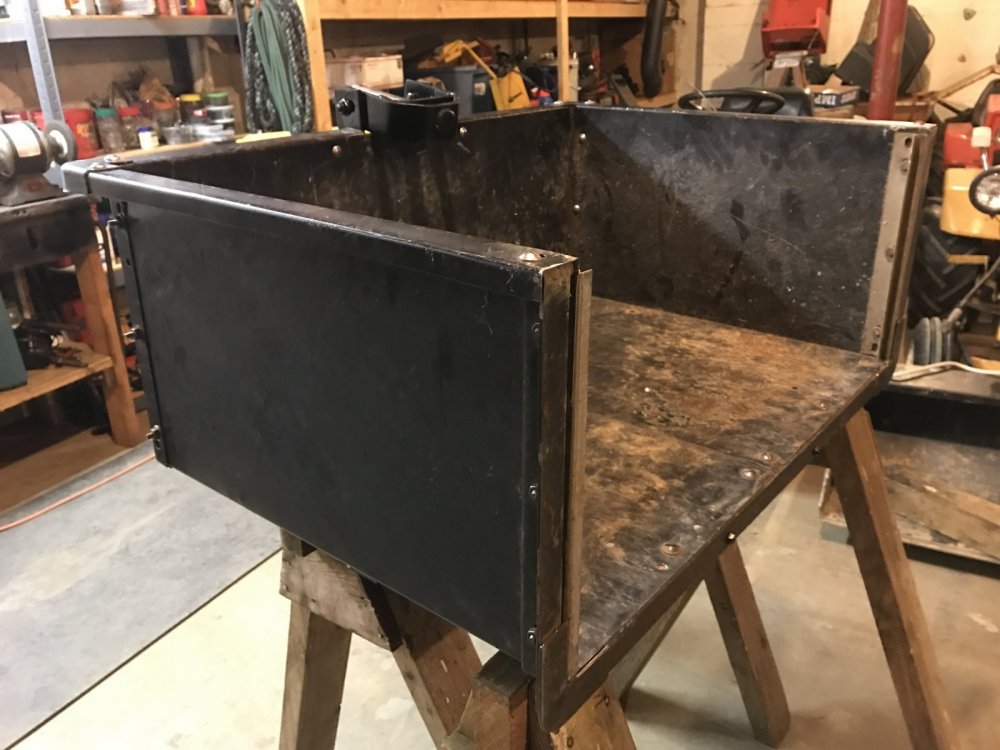 In reality, I am not sure how much use this will get but I can pick it up and throw it in the corner or on a shelf to get it out of the way much easier than moving my Allis dump cart that is in too nice shape to use anyway. And, I just like tinkering in the shop, now in our basement) as it takes my mind off work and other stressful stuff. AND - If I remember correctly former Club Secretaries have had a carry-all or a version of one anyway. As it warms and I use it this spring I am sure there will be a modification or two in the works. gw 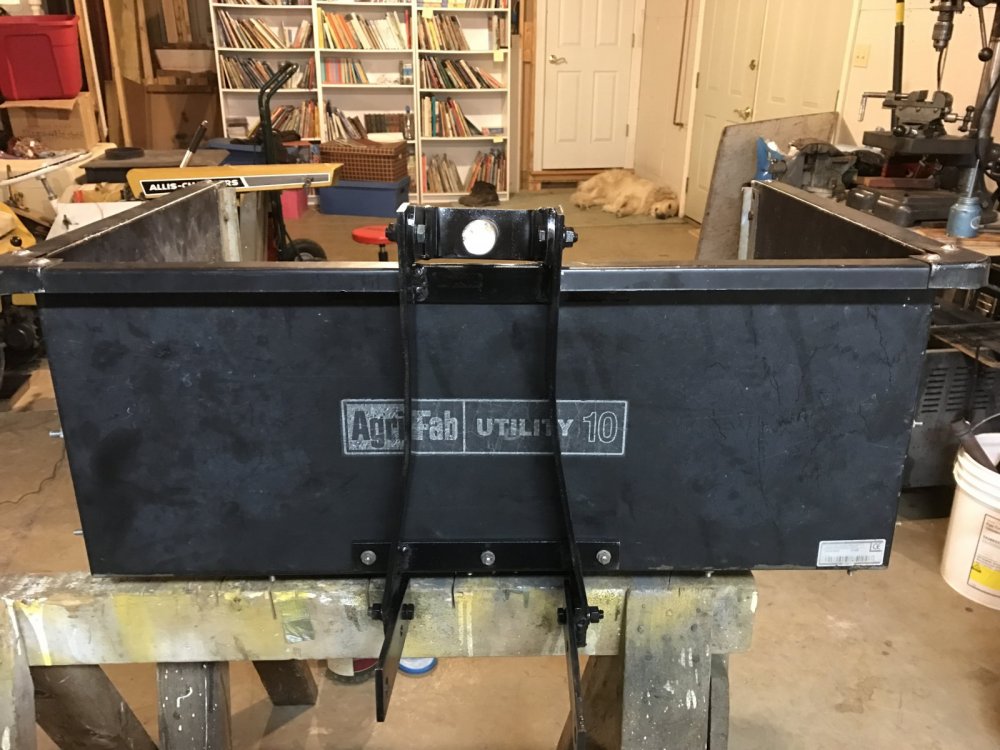 Note-that's Cooper, our English Cream Golden Retriever, watching the doors. He's my partner on all projects

and now in action 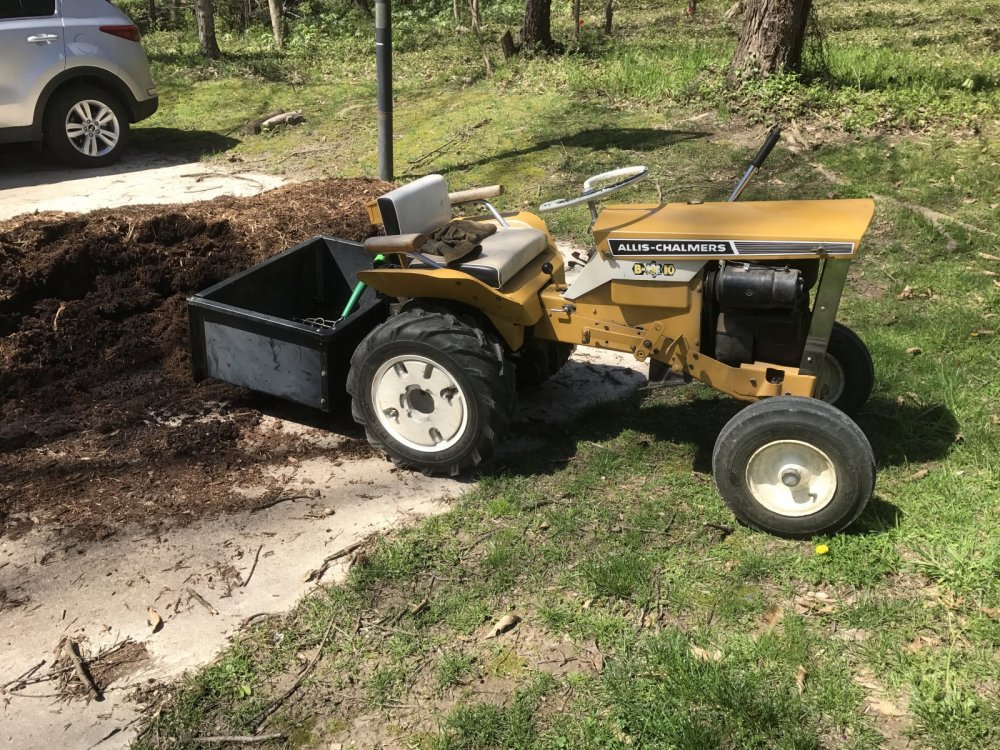 Its been wet most of the spring and when it wasn't Linda and/or I were traveling. Had a load of mulch delivered in early March. Have the Swisher bucket mounted on the B210 but it doesn't really work well to dump a bucket of mulch on top of the already growing hosta plants. And it takes several trips over the yard and my grass, as you can see, has its challenges anyway. So I decided what the heck, let's put the Agri-Fab Utility 10 Carry-all to use.  Here I am backed up to the wet double ground mulch pile in our drive. The silage fork fits easily as pictured so I can scoop from the sides and grab a large scoop full.

I'd used a larger Agri-fab Utility trailer to haul mulch this week but it holds about 2.5 times more, takes longer to load and unload (not enough built-in breaks), and you have to back it up. I am pretty good at backing 2 and 4 wheel trailers but I have earned the right to make it a little easier on myself when I want. No backing and more breaks it is. Here you see the loaded cart. I backed right over hosta plants and into the bed to. Nearly as handy as a shirt pocket. 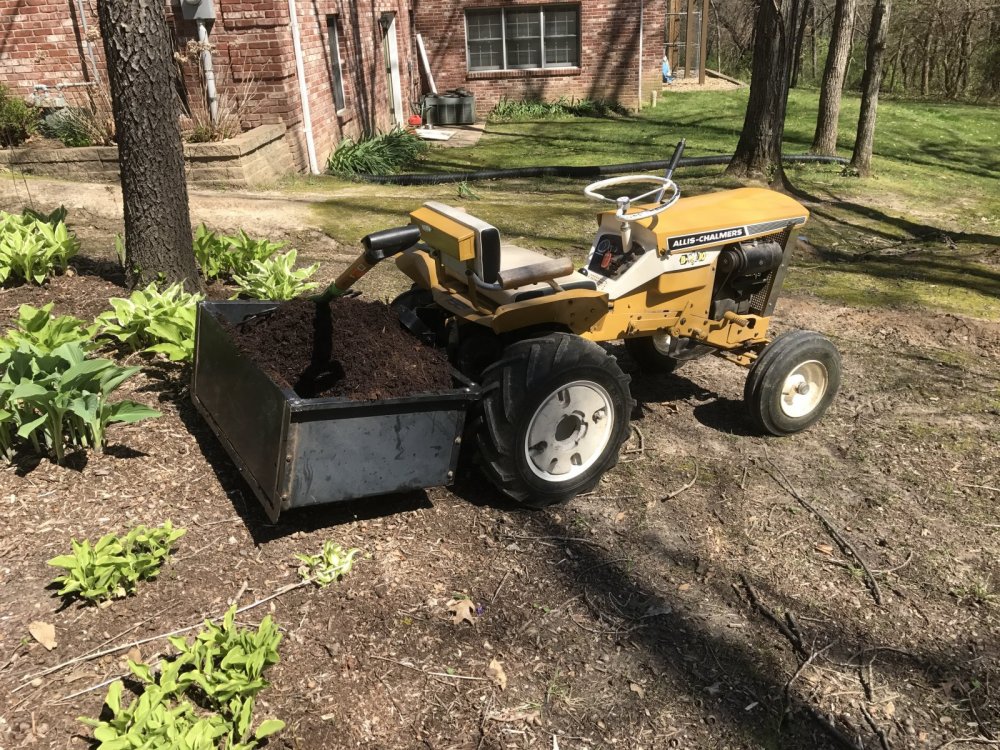 Cooper photobombed me. This mulch was wet/heavy but the box full wasn't hard to lift. Actually it seemed to break over center quickly making the armstrong lift easier than I expected. I'll post a picture of the hosta garden fully mulched later today. Love these warm, spring days. 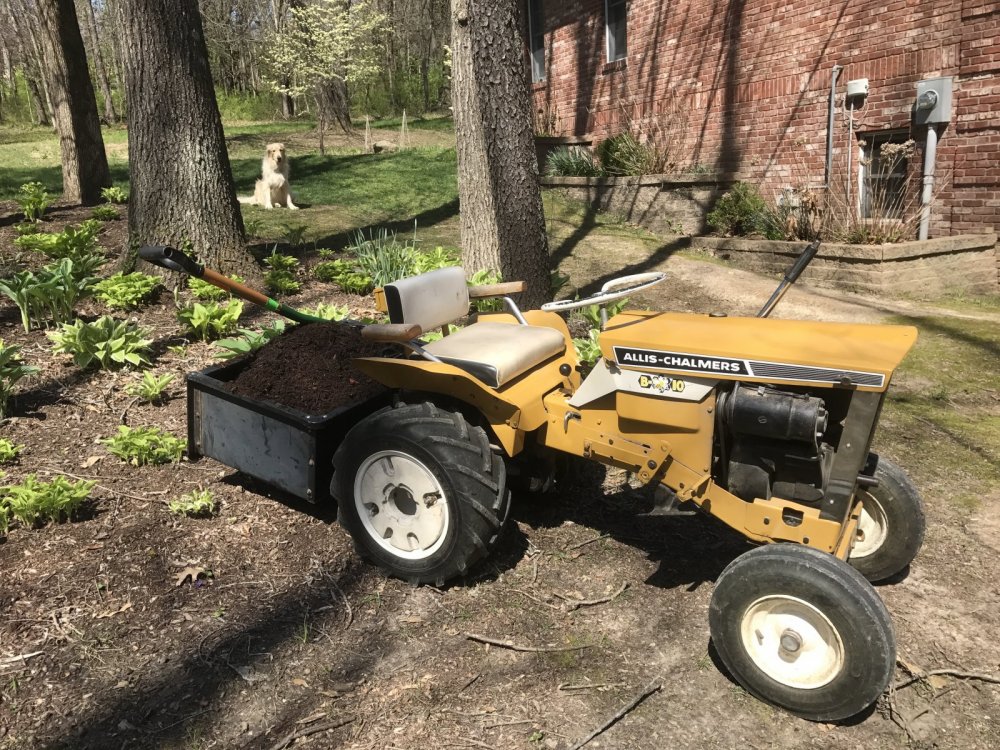 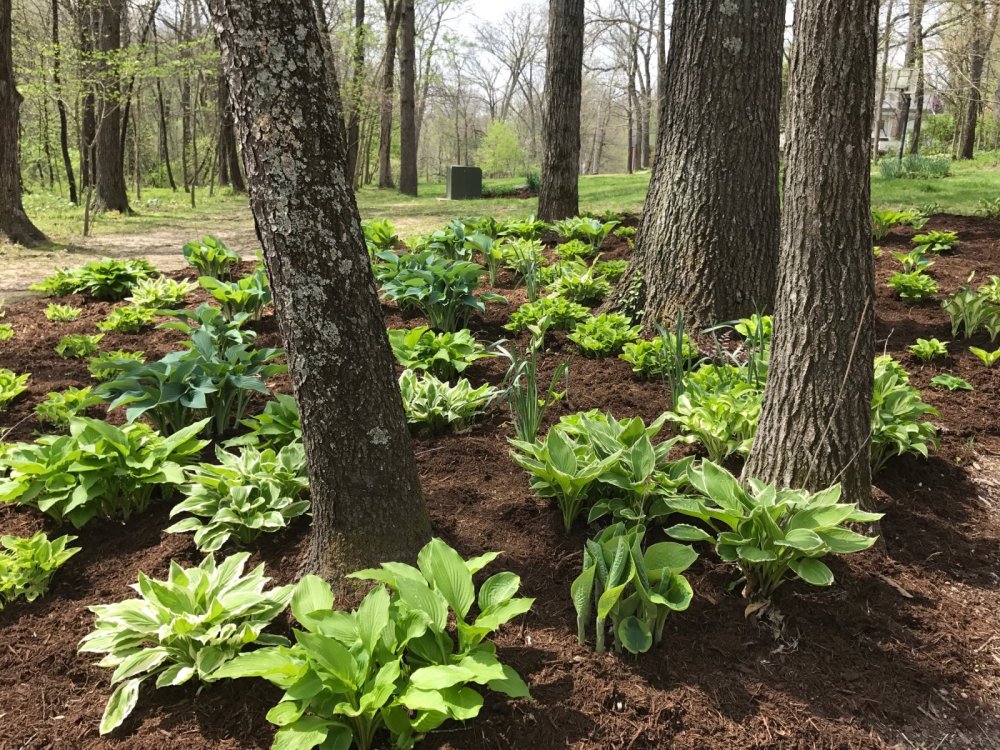 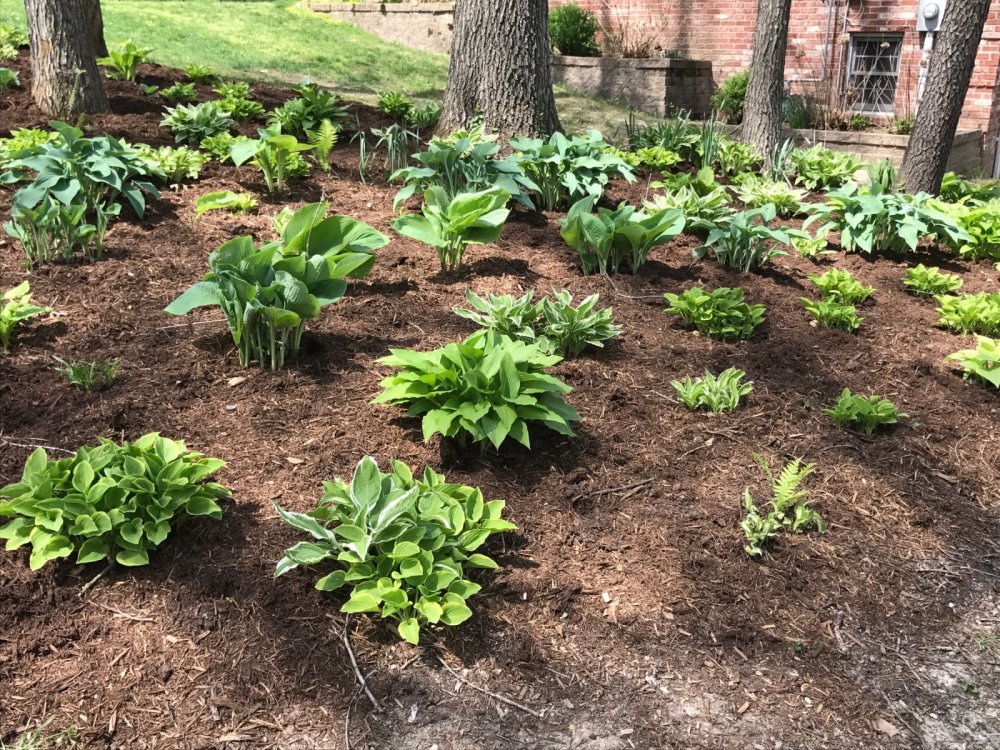 and now in March 2021 the carryall is mounted on my B-210 in the shop. All winter I used that combo to haul wood from the wood lot. It is never not mounted for long. 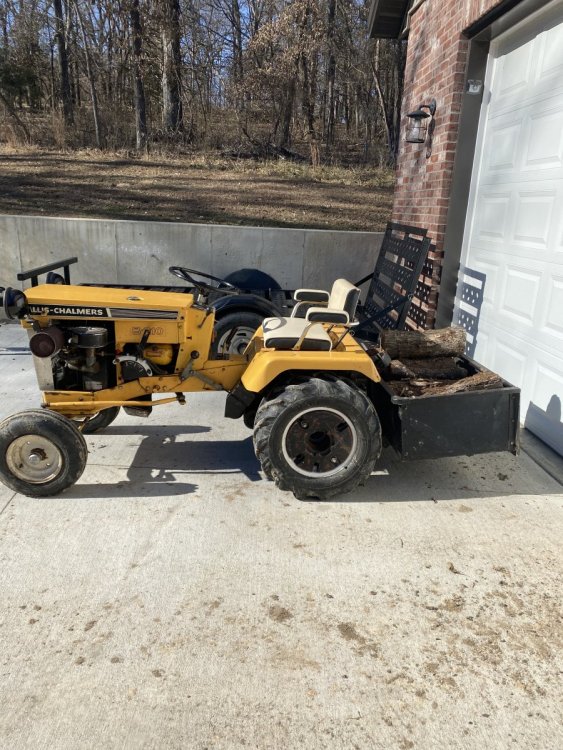