We're experiencing a beautiful June 24-25 weekend in Missouri with mild ('70's) high temps and low humidity.  I'm batching it right now so I planned to get the foot draggers out for a little work and repair. First, my B210 shucked the starter/generator belt last week while I was retrieving a neighbor's wood splitter from behind couple of houses and a swimming pool. Got to use my repop front/rear hitch for that job. Luckily I didn't kill the engine till the move was finished.  So, after work on Friday I started the replacement job with a belt I had removed from a parts tractor last year. Thought I'd just remove the bolts and spacers from the drive shaft, and the hydrolift belt, and slip the replacement belt over the pulleys. WRONG. After skinning my fingers, dropping the spacers in the frame, and finding I just didn't have enough room for my club hands, I decided it would be easier to remove the grill frame and pull the engine.  Not sure this is the preferred  but it worked for me as those 4 engine bolts come out pretty easy and I could move the engine enough to get the room I needed to work. Finished in time for bed so I felt I had accomplished my mission.

After the dew dried on Saturday I pulled the early B10 out for it's first work of '17. I'd mounted and used a Simplicity cable lift sickle on it last fall and, I had some tall grass and weeds growing along a diversion ditch that runs along the hill above our house. The old 23d Briggs started right up and the sickle ran smooth as silk; well it ran as smooth as a sickle should run. I operate at less than 1/2 throttle on the small mid pto pulley and it'll still shake the tractor a little. I'm trying to post a picture from a frame of the action video I shot but for now here is a picture of when I replaced the fronts with tri-ribs I'd taken in on a trade. 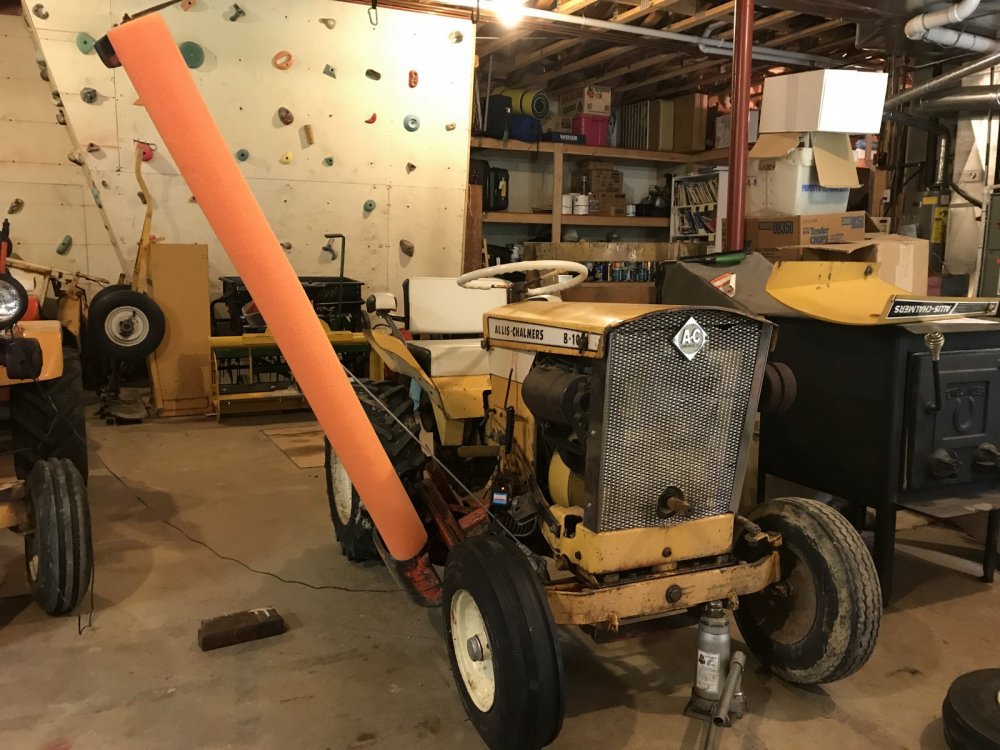 Next I needed to try to outsmart a squirrel. For 6 years now I've one upped the squirrels with my pvc pipe atop the bird feeder pole. I simply capped a length of 4" pvc, drilled a hole in the cap, slipped it over the pole, and drilled holes for the tarp strap that hold it up there. Squirrels have climbed that pole and gone under the pvc pipe but not on it. This has been a successful deterrent until this year. We have a grey squirrel population mostly and the go up and inside the pvc but not on the outside. I think the smarty may be a red variety. So, a little grease rubbed on the bottom of the pvc and we'll see if the little bugger can climb this. 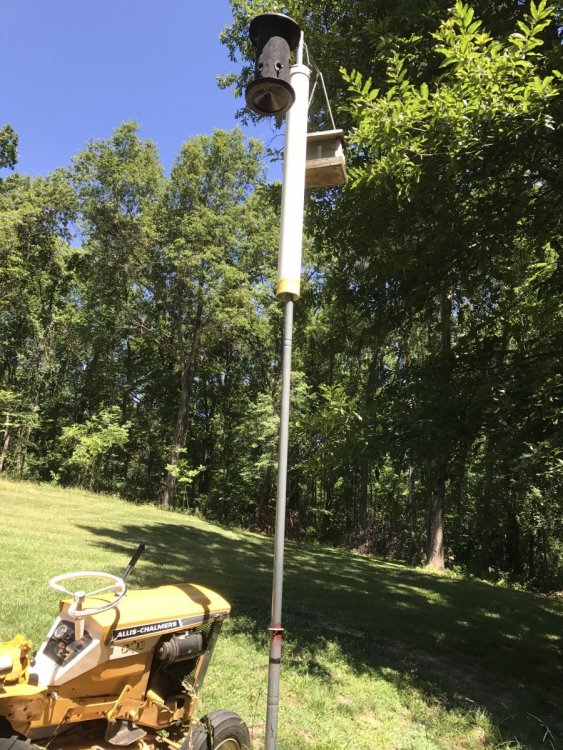 Later I took the Bumblebee 10 w/42" deck to the north end of our property to mow an acre open field. Although this property is contiguous our home property I have to load the tractor and travel about 8 blocks to get there. I don't mow this as often as I should and these old one cylinder tractors and deep decks really make me look good. Now I've had a gas leak on this tractor of late so it's been parked under our deck rather than in the basement. I thought I'd repaired it by replacing the shutoff valve with a NOS I had on the shelf.  Here I am showing a very small set of channel locks my brother in law gave to me one Christmas. Some of the family laughed at the small pliers so, every time I use them I take a photo and send to the laughing family members showing them who gets the last laugh... 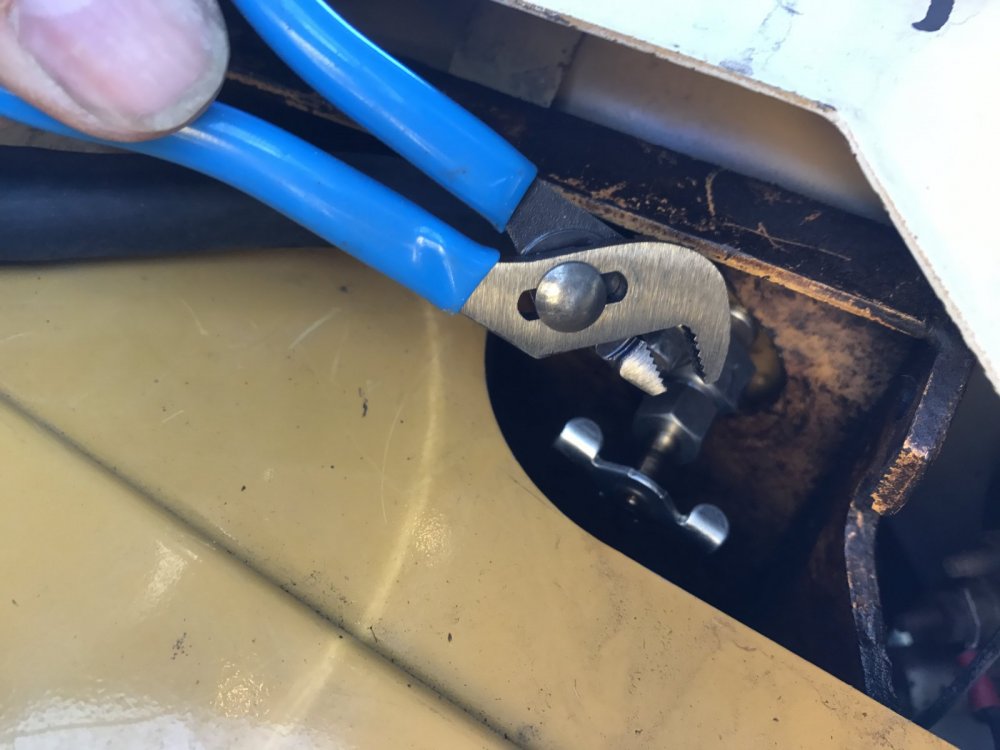 Actually, this was a fun day mowing. A cool breeze, plenty of shade, I only used about 1 1/2 tanks of gasoline, and all belts held. I filled the gas tank, loaded up the trailer, admired my work, and headed home. 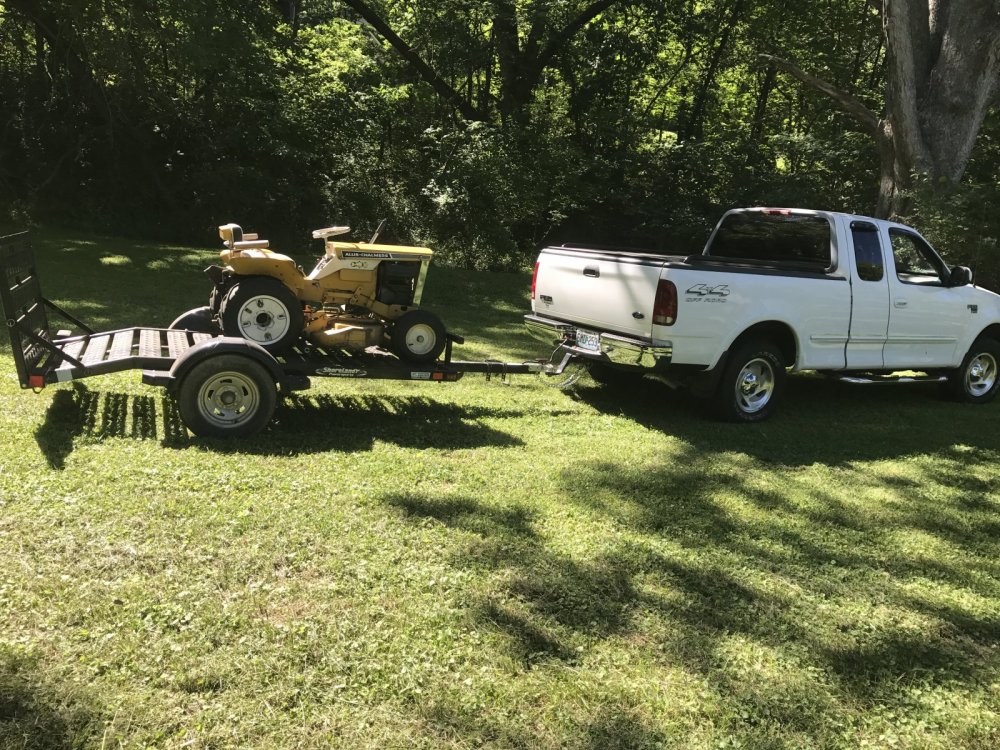 Pulled in the drive and I noticed gasoline spill on the side panels and frame. I wiped it off and started searching, hoping to find only expansion from the lid. No such luck.  Gasoline was leaking into the battery area as fast as I could wipe it up. The tank was nearly full so I had to drain it back into the can. Gasoline never runs out of those 1/4" lines as fast when you're on a planned drain as it does if an accident or an incident. This tank was repaired and lined about 10 years ago. This is what I found. 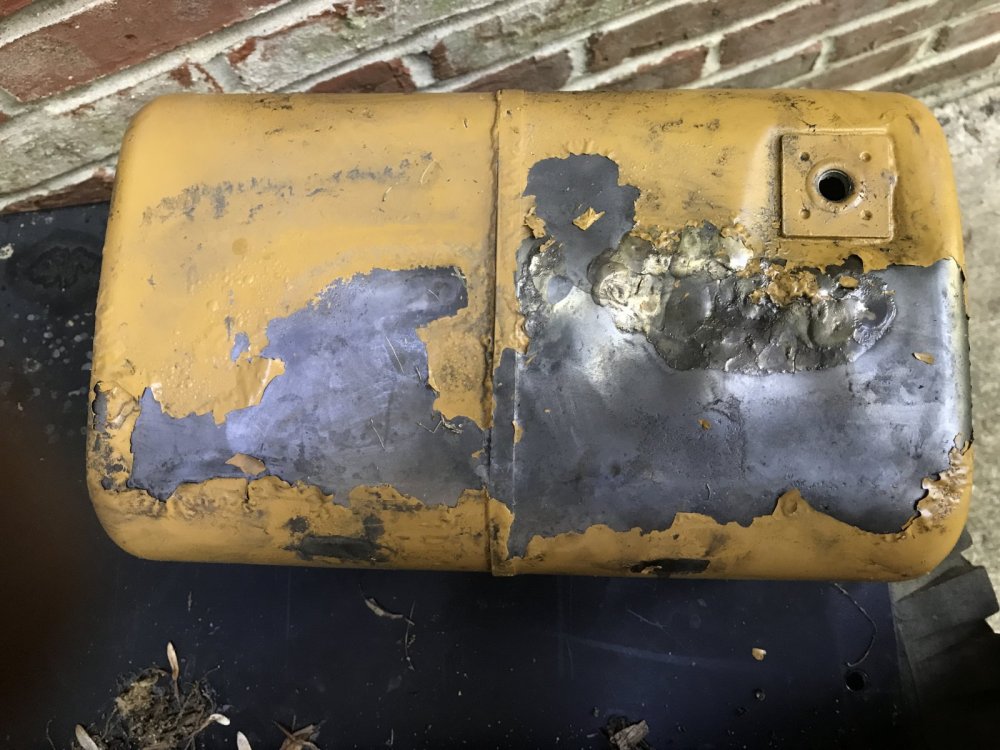 I got a repaired tank along with the 3012 deal so I checked and installed it. No leaks! Another unexpected but successful repair. Now, what to do with the yellow leaker tank? 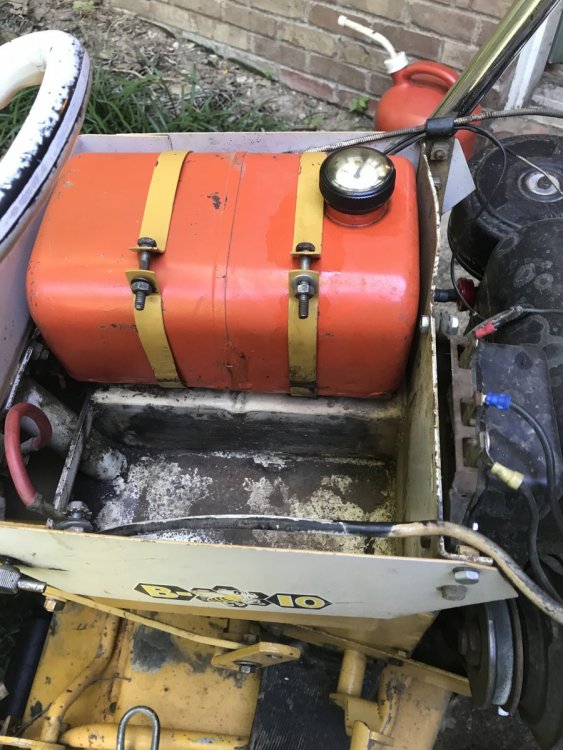 Sunday I wanted to remove the Rube Goldberg stack muffler that was on the 3012 when I got it from Swede. Great weekend to do that outside using my "gas wrench" acetylene torch outfit.  Was pretty darn stubborn so I had to get a spare piece of heavy sheet aluminum  (no parking sign) out to shield the heat from the carb, wires, etc.

So I went from this 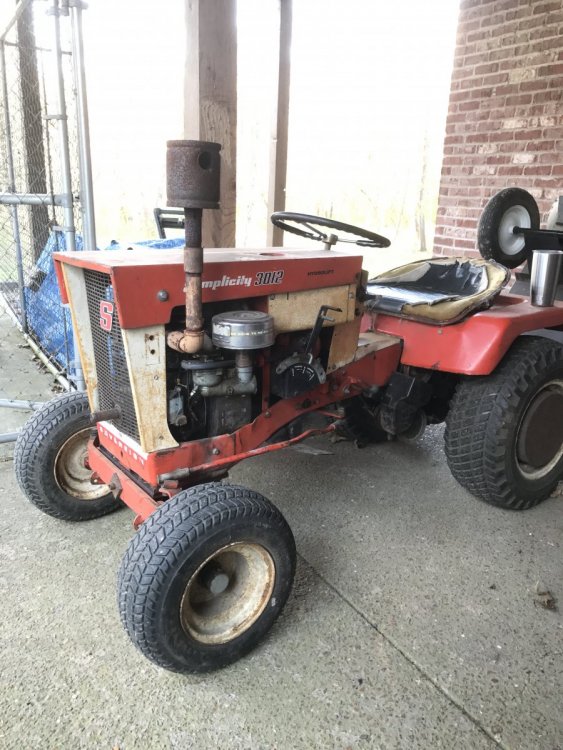 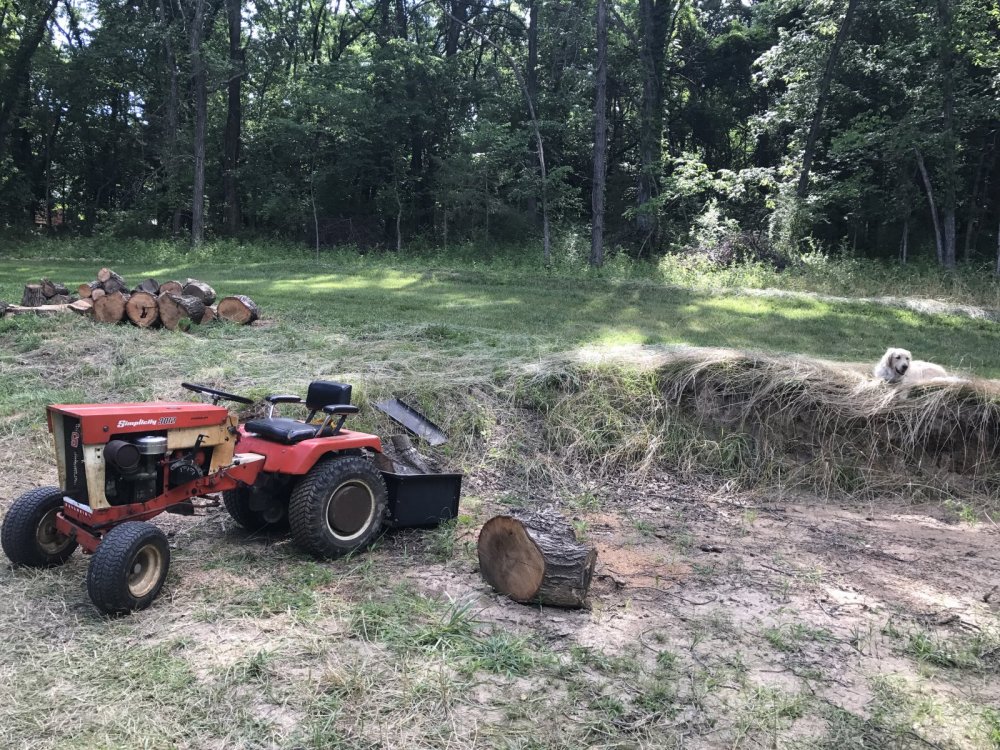 And I finished up Sunday moving some of the wood awaiting the wood splitter to a spot out of the way in case the concrete crew shows this week. I've found a lot of use for the utility carryall box I made earlier this year. Hitched to the 3012 w hydrolift, I found I could roll the large pieces into the box, lift it high enough to keep them from rolling out, and move to the spot away from the planned construction site. 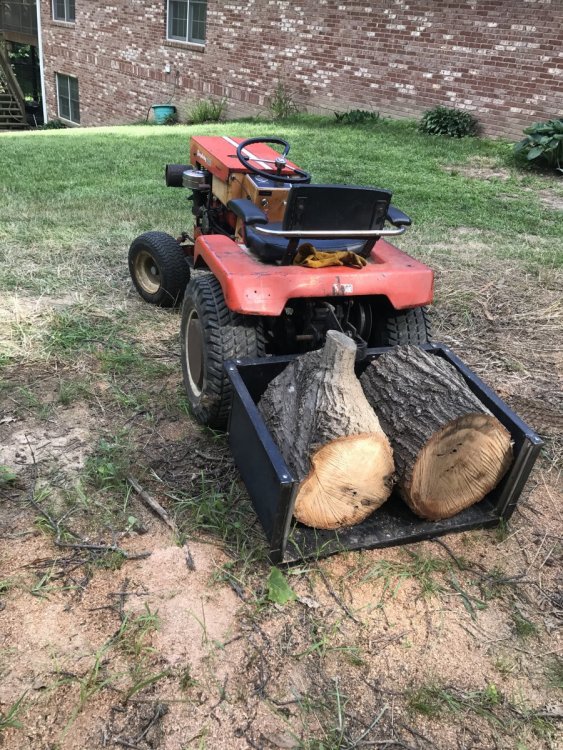 I also used the Agri-fab utility carryall to move the smaller and split wood from to an area out of the way.  This is a pretty good start on my winter shop heating. 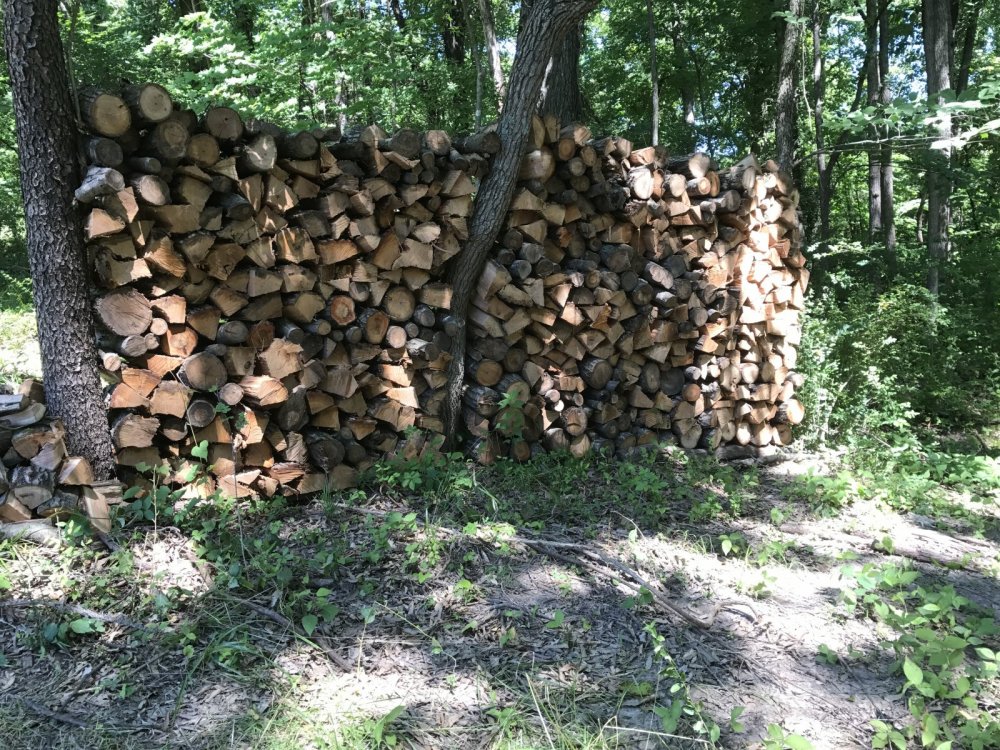 We will always have to make unexpected repairs to ~50 year old machines but that is part of the hobby. Collecting and operating them, listening to the engines lug, experiencing what they can accomplish, and using various pieces of equipment gets my adrenaline running full bore. Hope your weekend was as fun and fulfilling as mine has been.