6 years ago I had a construction friend dig a diversion ditch above our house to take excess runoff rain water a different direction. That worked well until the last 3 years when our spring rains come anywhere from 2.5-5 inches at a time. There is a rock layer not far below the surface so water also percolates out as well as runs off the hill.  I had failed to maintain the ditch so it had pretty well filled in at the breaking point so water just pooled and overflowed appearing like a pond dam overflow during rains this spring.  I hauled out the long handled shovel, tiling spade, Allis Bumblebee 10 plus Agri-Fab cart, Simplicity 3012 and Agri-Fab Utility 10 carry-all. Had my own little parade. I haven't taken the carry-all off the Simplicity 3012 this spring; it is so handy and about the correct size to allow more frequent water and shade breaks. Also, the 3012 hydro lift has no problem lifting and holding a full load of dirt (even for long periods it doesn't leak down). 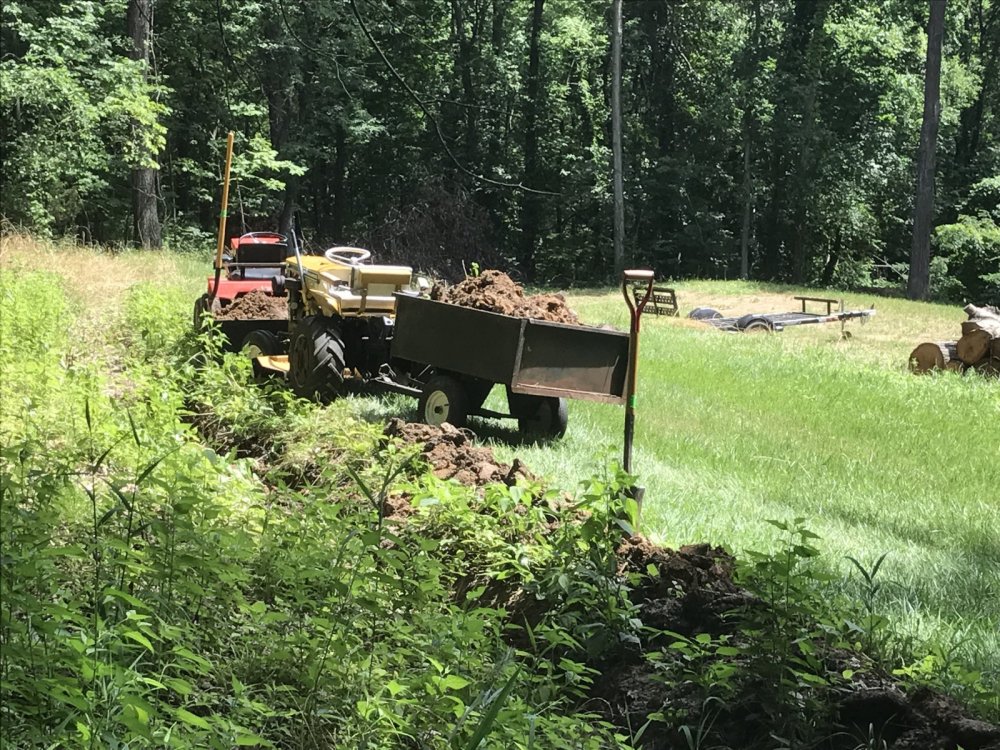 I started digging on the downhill grade side of the ditch clearing the channel so the water that pools on the upper side can have route of escape. I really don't work in a very systematic manner though as you'll see that I still need to dig on the downhill side in the next picture in order to make the grade work for me. Silt from the wooded hill above mixed with red clay dug pretty well after recent rains. I moved the soil from the ditch to areas of need in our backyard. 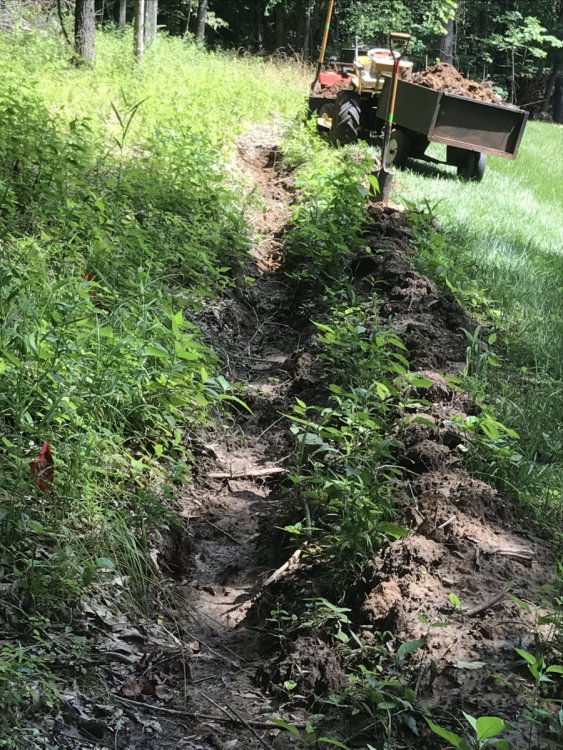 The Agri-fab cart is an older unit, solid metal floor & built pretty darn tough. I filled it full several times and found right away the break-over-center point was not engineered correct for manual lift/dump by a short guy over 60. I needed some real umph to lift the loaded bed unless the rear of the cart was on a downhill slope. Probably loaded it a little too heavy (I'd bet 500+ lbs) bc I noticed the spot welds on the under gird popped in a few places after this use. Wasn't built to haul and dump full dirt loads. The Agri-fab 10 carry-all tailgate is very light constructed and bends too easily. I am going to structurally strengthen it later with angle some light angle iron. That'll give me a chance to use my Hobart 125EZ wire welder I got at TSC on clearance last year. Wire welding is different for me. I learned to weld on Forney and Lincoln 240 stick welders using mostly 6011 and 6013 rods. I must say, this little 110 wire feed welder is so much easier to start and hold a bead; and so darn versatile. 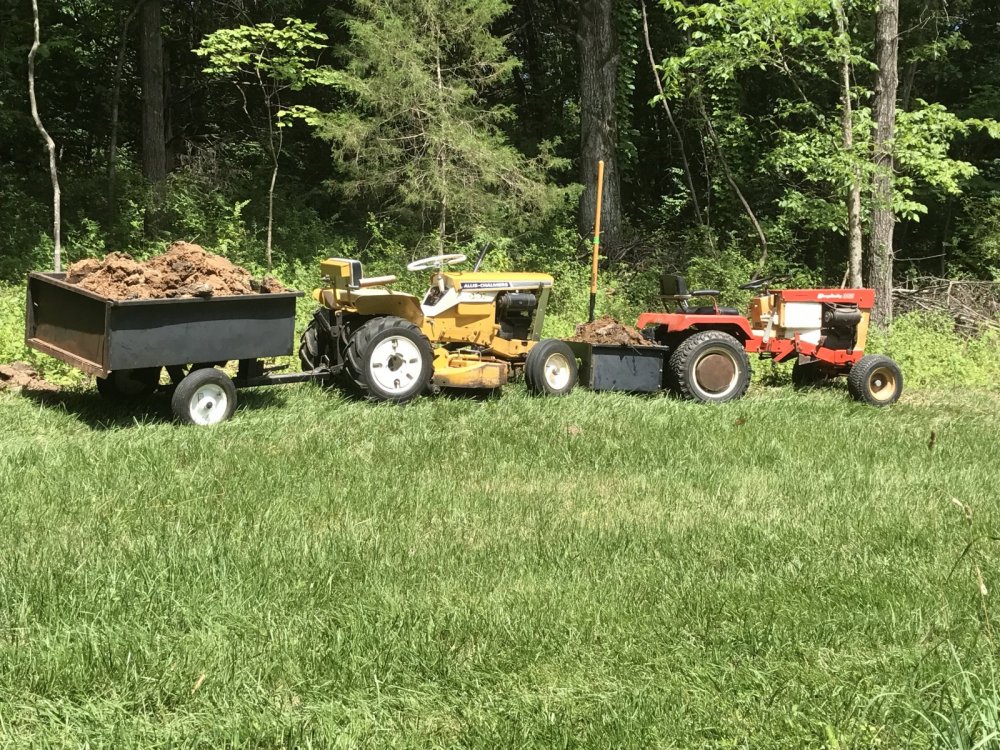 Another shot of my parade.  I really like and have found so many uses for the carry-all. I do need to lengthen the 2 arms that pin to the lower hitch to give it more travel, but it works really well as it is. And thriller: fill it with dirt as below, drive up a small grade and you start wishin you had individual brakes to steer. The front tires just float or ride a couple of inches off the ground and steering with them is by chance. All in all I am just mystified by how these small garden tractors were engineered utility, strength, and reliability. 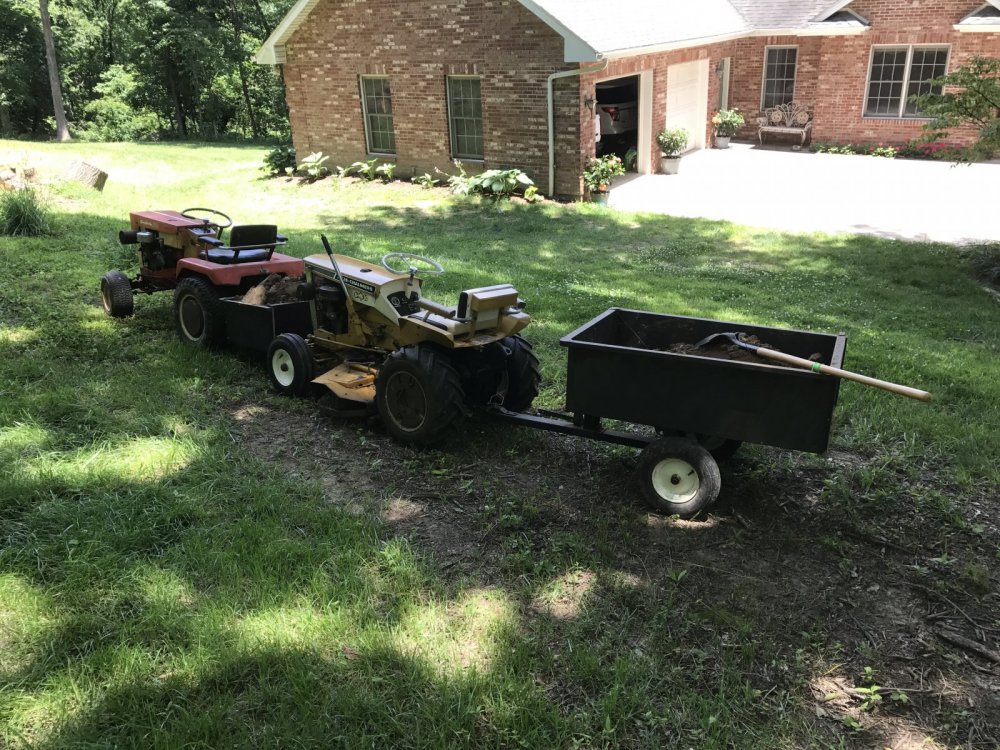 And finally, our street is an older small community that has organized activities on holidays including Independence Day. At 10am kids games are held in various yards and, at noon there is a pot luck lunch.  Immediately after lunch we hold a pet and wheels parade. This year I opened festivities driving an American flag bearing Allis B210 to the beginning of the street and back to our drive at the end. Then, as families began leaving the gathering, I drove the flag tractor up the street and back to close. I know, I need a new flag! 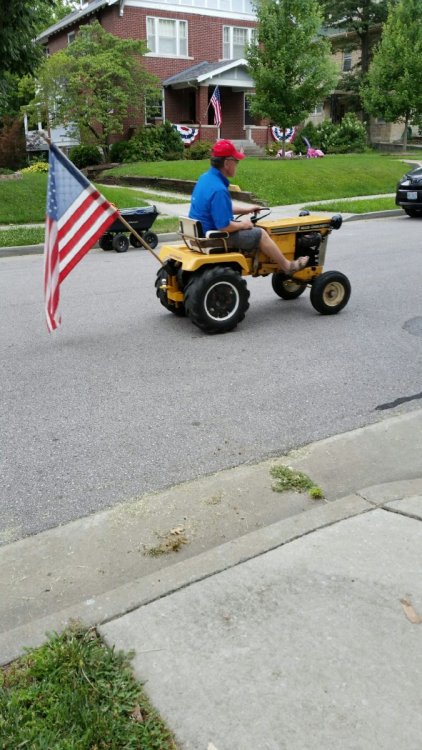