Everyone has them if they admit it. My money pit long-term project is about to get re-started. I've been lurking around eBay, Craigslist, Facebook Marketplace, and on-line classifieds. Patience... I won the Ebay auction the February 16, shipments only on Fridays and for some reason not on all Fridays...Confirmation received item was shipped March 1 from Portland OR and on March 8 the box arrived via Old Dominion at my work in Jefferson City, MO. 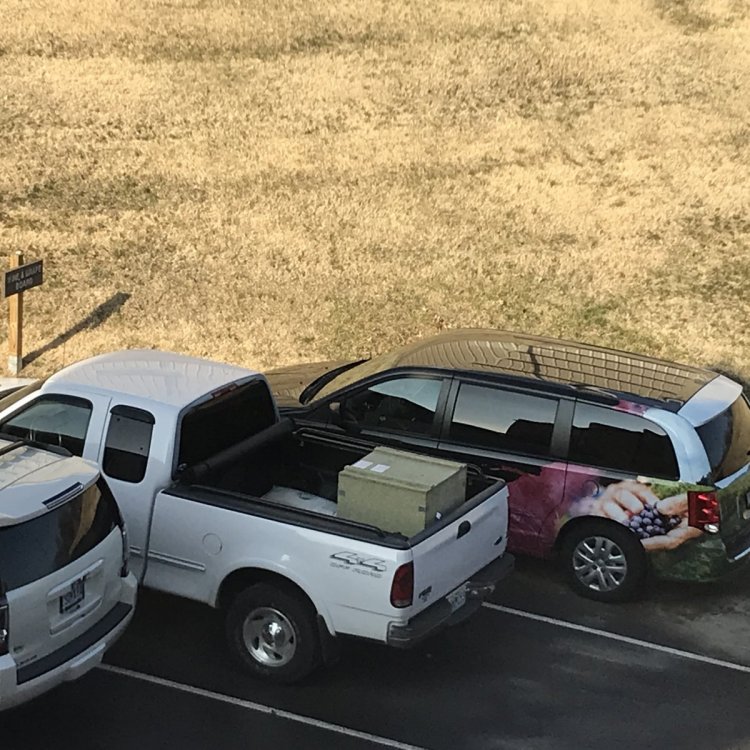 Box unloaded in the shop. 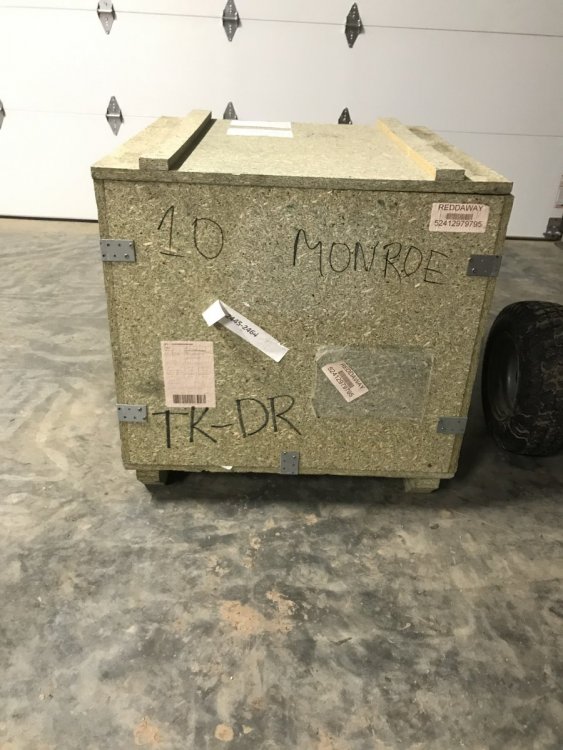 Lots of screws and staples 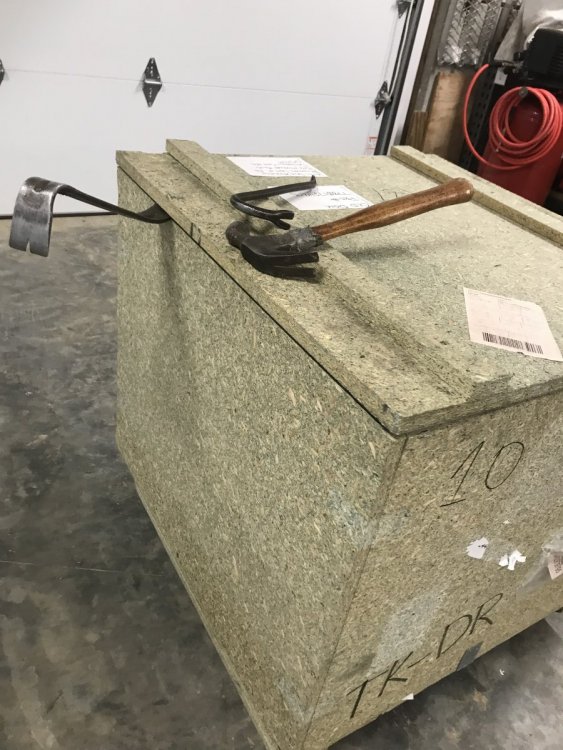 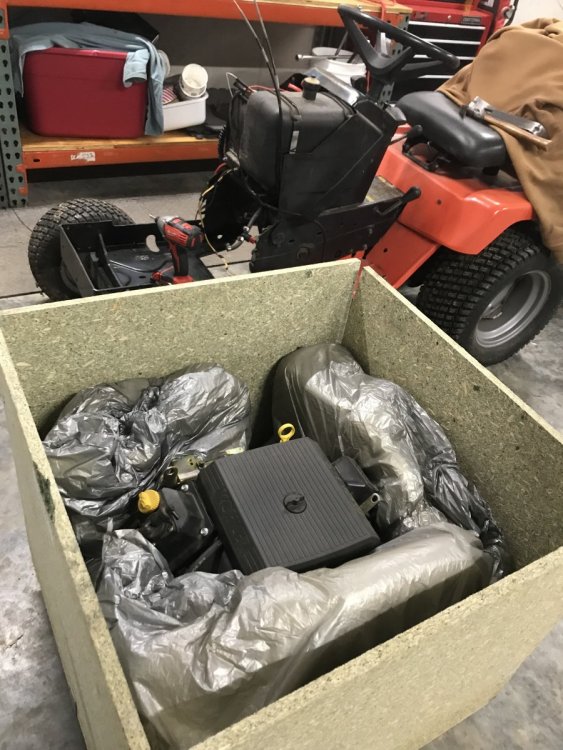 Contents revealed: Kohler CH-18  that has been setting in a warehouse with some parts taken off. I worked out a deal to trade the vendor the muffler I didn't need or want for a valve cover that was robbed for parts. Got lucky - was supplied with a newer one with yellow o-ring. 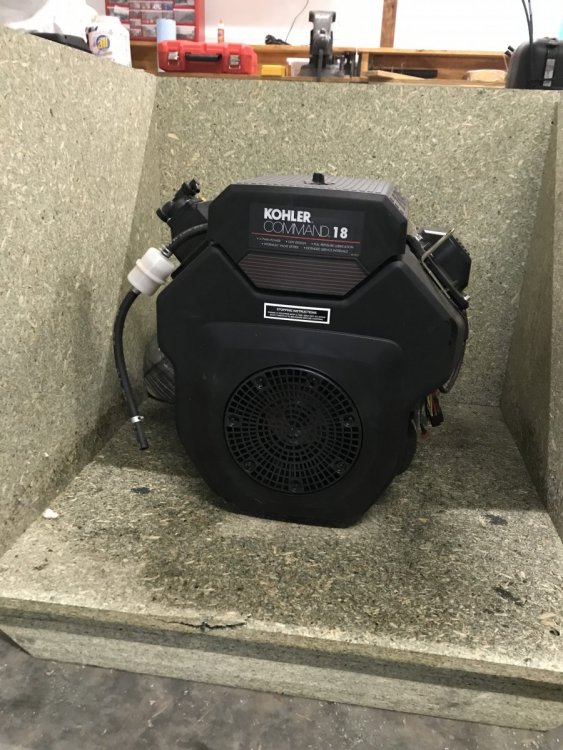 Engine is 2004 vintage. Its clean inside but I'll run the first oil a short time and change along with filter to rid of dirt and dust particles that I am sure have accumulated. 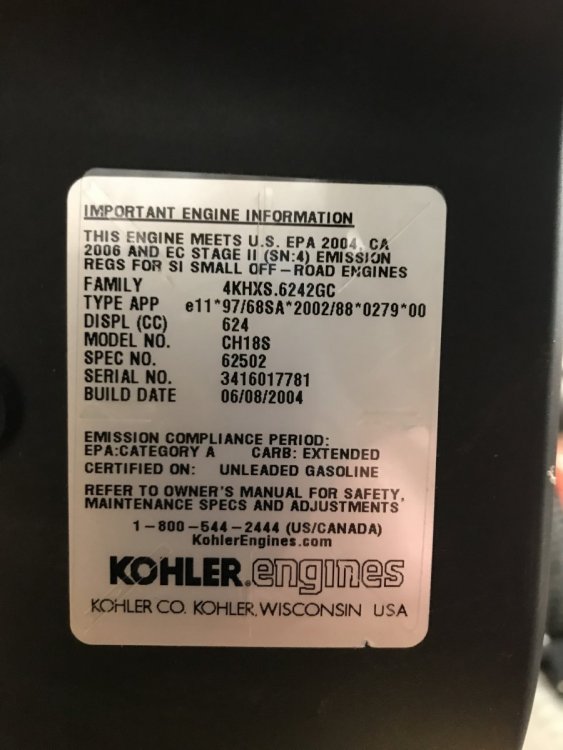 Modifications begin. I have most of the parts needed to make it Simplicity worthy 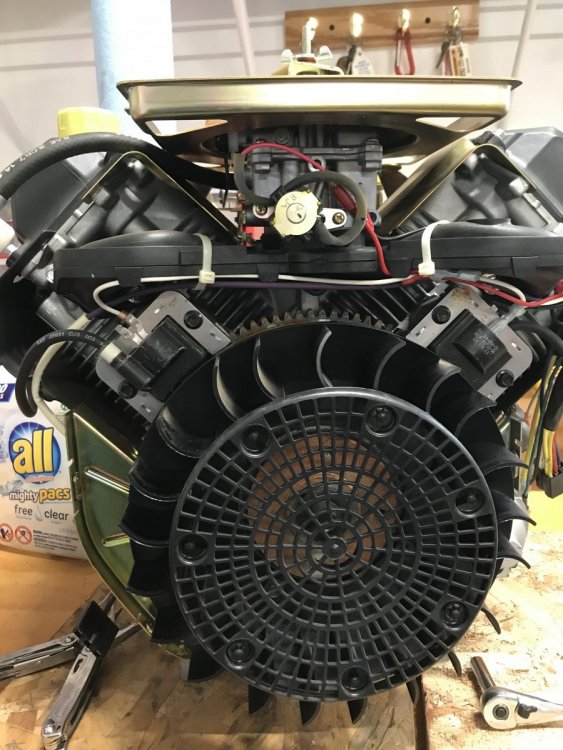 Will change out ignition coils with newer Kohler replacements I have on the shelf. 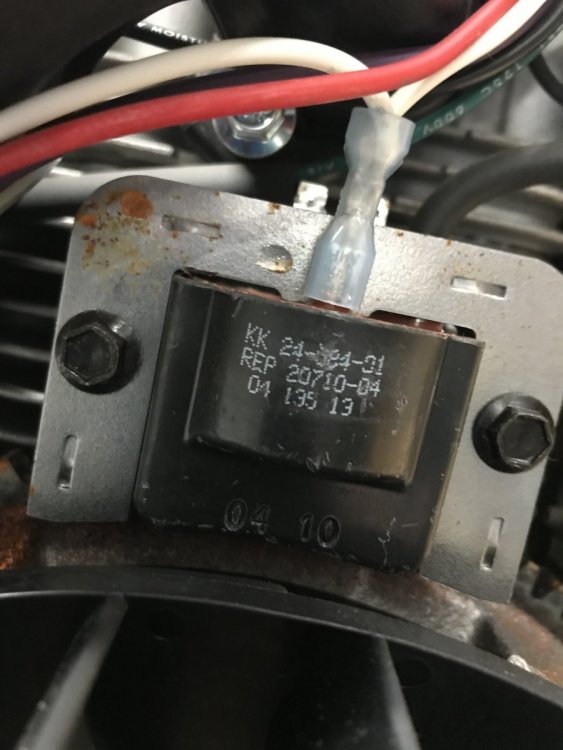 Ordered inspection plates from OPE Engines and headed to Destin, FL. Project to resume upon return

As usual I practiced installation to get it right. Somehow I didn’t consider the engine might not be wired correctly for my application. Here is a picture of 1st install. If you look close you can see extra wires at the starter. Not shown are the extras in the connector. 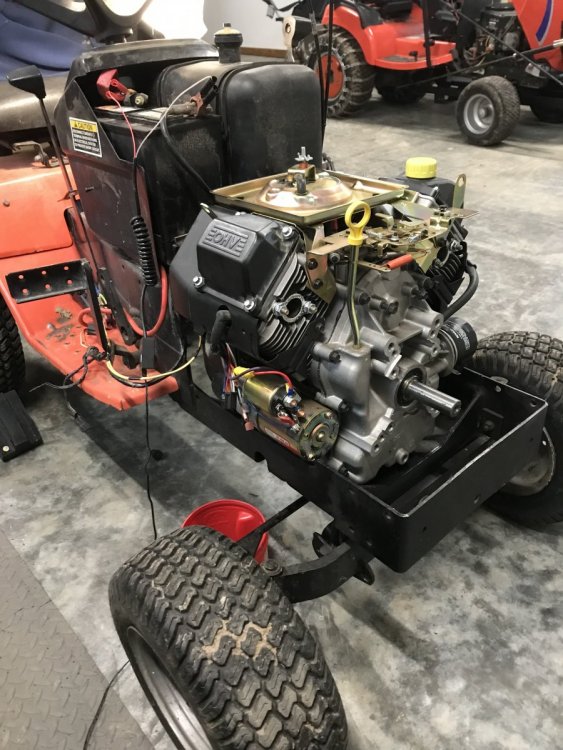 So I uninstalled the engine and stole from the shot parts Command that was in the tractor when I bought it. I planned to build my own new harness but my local O’R does not stock Delphi-Packard connectors do I installed the old Simplicity application harness. 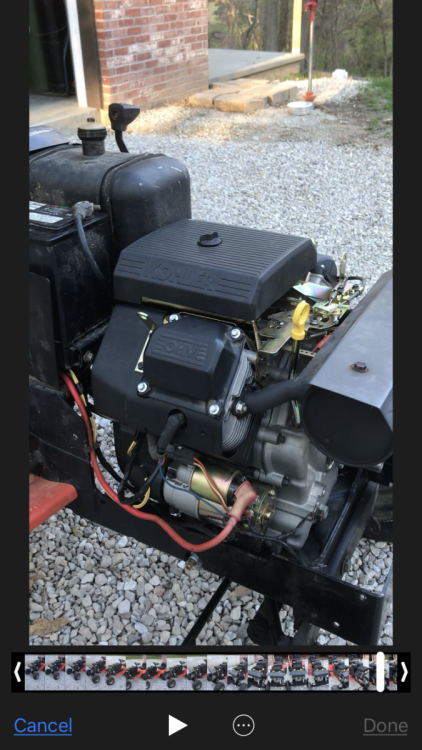 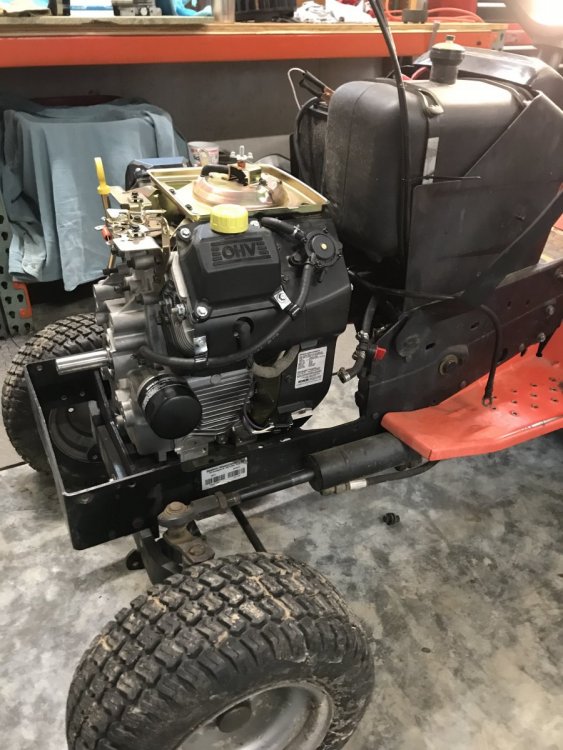 I have a video of it purring after initial sputters😮 what a nice sound. Wish I could upload from my iPhone but a screenshot and your imagination... Next the hood.

I used @PhanDad Kohler muffler idea. Notice, I didn't bend the exhaust outlet exactly correct so the exhaust pipe I had made at a local muffler shop is resting on the frame. May have to adjust with the gas wrench later.  I will not install light bulbs in the headlights until I know the heat situation up front. The muffler is noticeably located higher than OEM. I expect I’ll be removing the old recessed bezels and adding something outside the hood. Anyone have a set from a 75th🤔?

Update:  headlights cannot connected. The hood would not close due to muffler rubbing on the light. 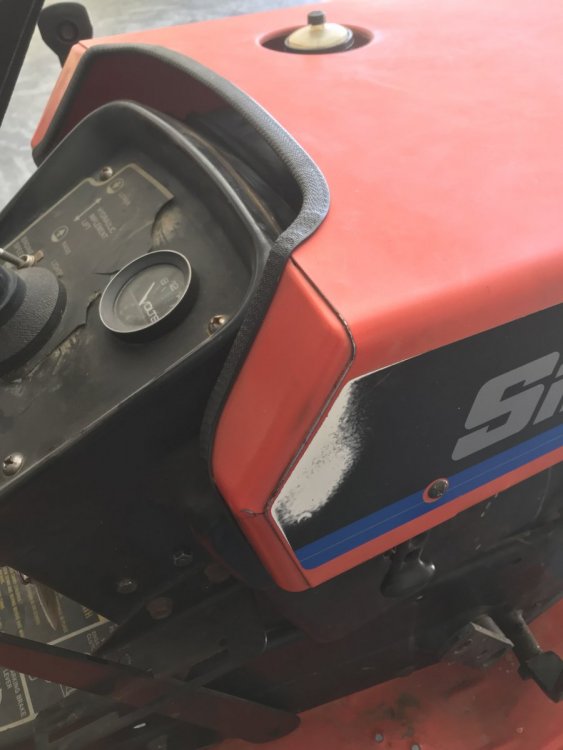 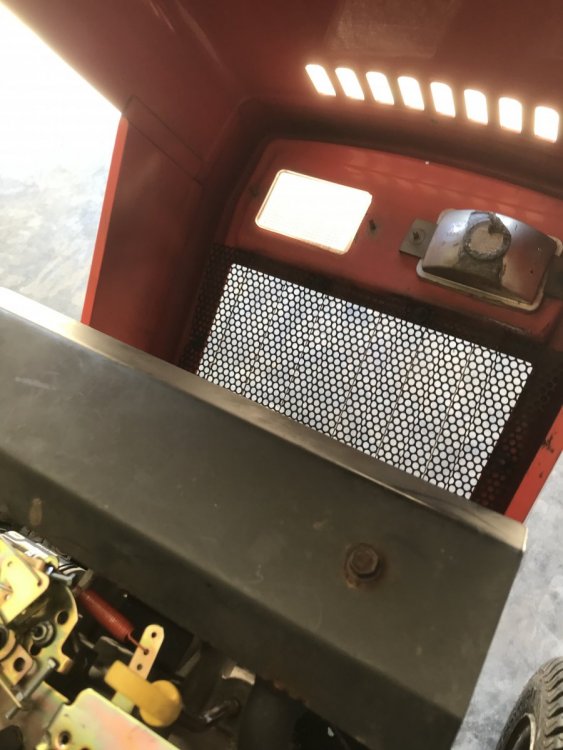 The hydro needed adjusting to center neutral. I used HF chocks to secure the tractor while working on it in the shop but at startup it climbed out easily (in neutral). Blocked up the tractor so the transaxle was off the floor, adjusted per service manual, and off to work.! 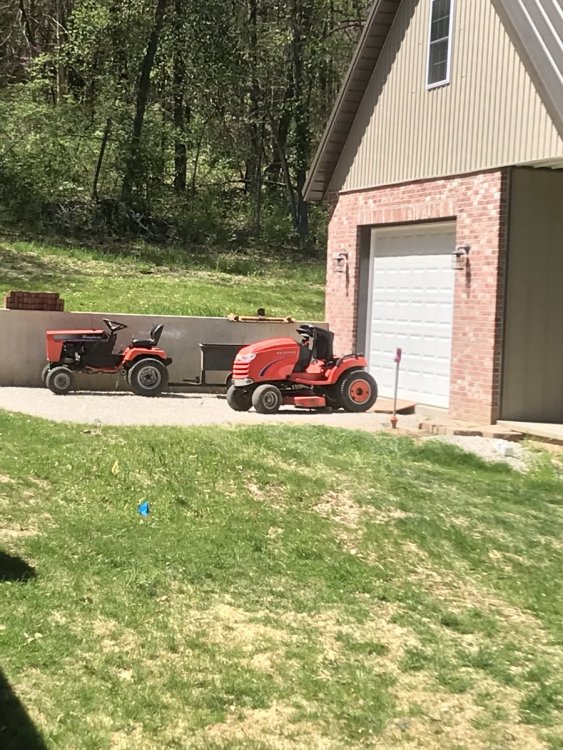 Worked Saturday clearing the yard  of sticks and mowing the first time.

Engine ran really hot and I noted the exhaust getting cherry red while not working the tractor hard at all. Discussing at length with @CarlH only 3 causes: too much fuel-carb, timing-wrong ignition coils. Took a look again at paperwork from OPE Engines & yes I bought & installed wrong replacement coils! @PhanDad is correct. So, coils I took off are 14yrs old but essentially new. Tear down time 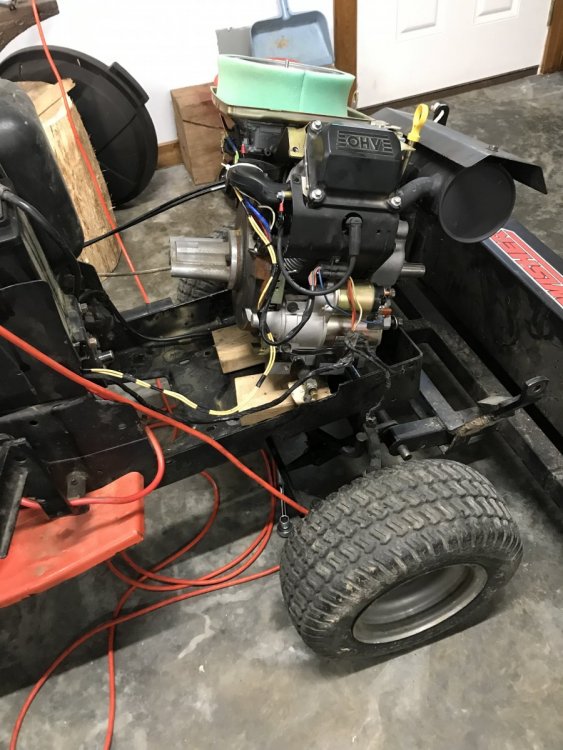 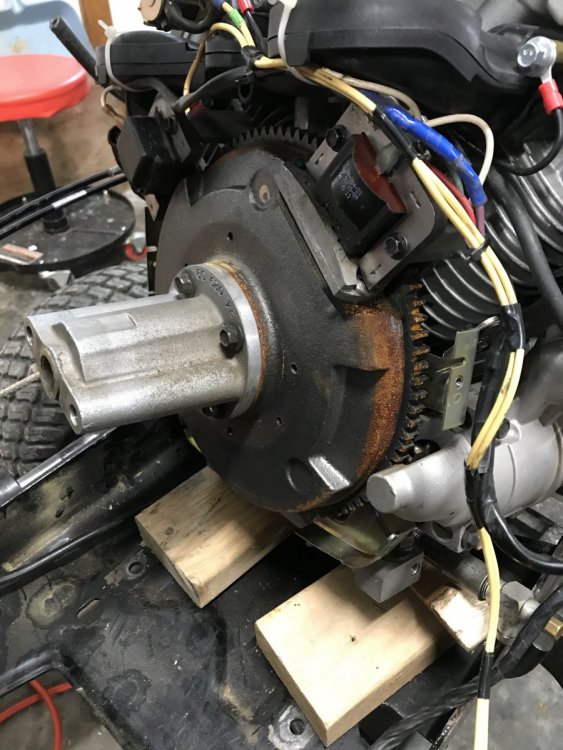 Original coils in and it runs lots cooler! I’m excited to begin using it harder around the yard & lots.

October 10, 2019  I really enjoy working with the Sovereign now. Engine purrs and performs as it should. I had to remove the lights from the hood because the Kohler muffler addition invaded the light's space. I covered the area with sheet metal and plan to add lights outside the hood sometime in the future. Really like the power steering. Have a transaxle leak that I'm not sure if a hose, connection, or seep from a gasket area. When hot the oil spots the drive quite a lot.