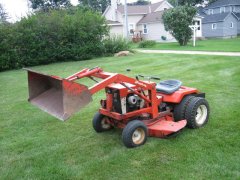 How do I remove gas tank from Big 10?

By kpandrews, November 28, 2009 in Talking Tractors