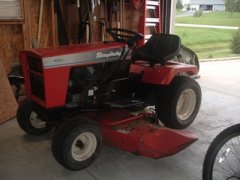 Gremlins in a Sovie with 18 hp Command

By tripleguy, February 10, 2012 in Talking Tractors