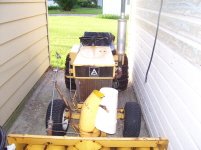 why did they make R & L discharge @ same time?