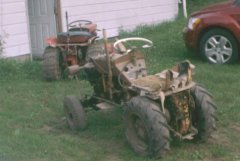 Big Ten back on duty after an 8 year sleep

By ridgerunner, February 5, 2015 in Talking Tractors