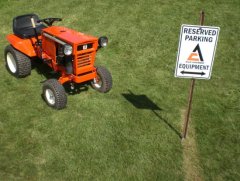 At least its the right color...Jacobsen 53500 Haul